On October 4, the Truth, Reconciliation and Reparations Commission finally got a chairman, former UN official Lamin Sise. He will have the difficult task of heading a commission that must, it seems, now race against time to meet the rising expectations of the population – to the point that the first public hearings could take place very early. “The first hearings will no doubt take place before the end of October, because our investigation team has already identified witnesses and took their statements three or four weeks ago,” declared the commission’s executive secretary Baba Galleh Jallow. With the commissioners still getting to know each other, this would be unprecedentedly soon. Joanna Rice, who represents the International Center for Transitional Justice (ICTJ) in the Gambia, thinks the Commission is in a delicate situation. “It will be difficult to find a balance between time to reflect on priorities, how to use the two year mandate, how to protect witnesses, and the pressure to go fast, to show concrete action,” she says.

Even the format of these first hearings is not clear. There are few indications in the Commission’s mandate, which was approved by parliament in December 2017. The commissioners therefore have a wide margin for interpretation and will have to make choices. A post of lead counsel to the Commission has been created, following a decision by the justice ministry. It appointed Essa Faal, who has worked at the International Criminal Court in the office of the Prosecutor and then as a defence lawyer. Justice Minister Abubacarr Tambadou wanted to reassure people about the appointment. “The Commission is not a tribunal, and the lead counsel is there to support and guide the hearings,” he said. “It will not be an interrogation. Victims will have room to express themselves, and he can help reframe their testimonies.”

Executive secretary Baba Galleh Jallow says the Commission will not copy the model of another commission investigating Jammeh’s financial dealings whose hearings, similar to those of a court, would not suit victims. “We want the people testifying to feel comfortable, to want to tell the truth,” he explains. “It’s more a sharing of experiences to help heal the country of its wounds, so everyone knows what happened and there cannot be a return to dictatorship.” For while the Commission aims to establish the truth about serious human rights abuses, it also hopes to go further with the launch of a national dialogue campaign targeting transformation of Gambian society.

Finding the right balance between truth, justice and reconciliation has been a challenge for other commissions of this kind. John Charles Njie, vice-president of the transitional justice technical committee set up by the justice ministry, is calling on behalf of civil society for a model that fits the country. “Traditionally here people don’t tell their personal stories in public, they do it rather within a closed environment,” he says. “We are a small society where everyone knows each other, so someone who talks could easily be stigmatized. The Commission must take this culture into account.”

The Gambian Commission wants to innovate especially in one area: reparations are to be attributed directly by the institution. But this provision also raises questions. “Attribution of reparations is not clearly defined in the Commission’s mandate,” says Sheriff Kijera, head of the Victims’ Centre, an NGO set up after Jammeh’s departure. “We hope they will be granted on the basis of the victims’ needs, for example health care or school fees.”

So while the Truth, Reconciliation and Reparations Commission may have been inaugurated, there are still many questions about its form and strategy. 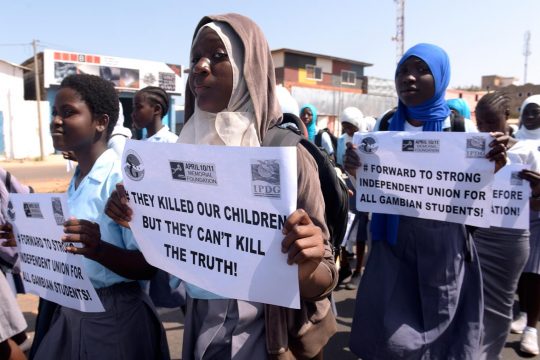