“We ask those handling this case not to delay it again, both sides need justice and it should be soon, otherwise it does not serve the purpose for the people who suffered during the Lord’s Resistance Army war.” This is what Josephat Okello, a victim of the LRA war, told JusticeInfo as the trial of former LRA rebel commander Thomas Kwoyelo opened on November 12.

Okello has not been heard.

On the second day of the trial, it was adjourned until February 2019 by the International Crimes Division of Uganda’s High Court, sitting in the regional capital of Gulu, the epicenter of the conflict that saw thousands killed, maimed, raped, abducted and displaced.

Kwoyelo only had time to deny all the 93 counts of war crimes and crimes against humanity brought against him by the state’s prosecutor. His bail application was also pushed to January 18, 2019. The news angered both the victims and the former rebel commander. 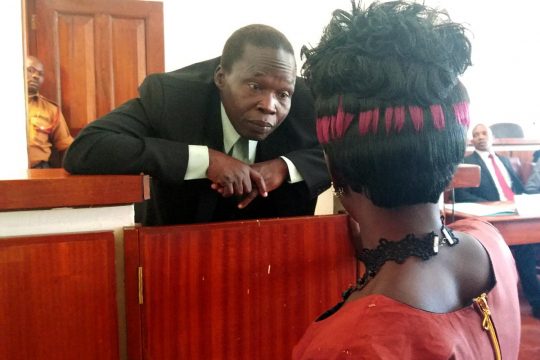 LRA’s victims: “We ask those handling this case not to delay it again”

“Our people died but those people are not bothered”

“I am not happy with this. It’s too much,” Kwoyelo said in the local Acholi language while touching his chest in apparent anger. “So they want me to die in prison?” he asked in a raised tone. Kwoyelo’s wife Grace Auma wept as the prison guards led him into the holding cells.

Just as Kwoyelo is fighting hard to regain freedom, the victims of the LRA armed conflict are seeking justice and postponements of his trial is rubbing them the wrong way.

“For how long will this go on,” Anna Maria Akello, 46, a victim of the LRA war said as she exited the courtroom. “Our people [relatives] died, our property was looted, we are now paupers, surviving on handouts but those people are not bothered. They keep postponing. Why?” she asked. With a kid strapped on her back, Akello, said she lost her two sisters and an uncle in one of the LRA attacks on a village in Guruguru, Amuru district, in Northern Uganda in 2005. “We have been patient but patience has a limit,” Akello added.

For George Wilson Otema, a resident of Nwoya, a district neighboring Gulu, the trial of Kwoyelo is a litmus test on how Uganda can handle a case of this magnitude. “These adjournments show how unprepared we are in handling such a sensitive case,” Otema said. “It is almost 10 years since this case begun [and] we are yet to move. We want an end to this [delay]. If the government is not ready to deliver [justice], let them declare and release him [Kwoyelo],” he added. “We lost all we had and our people died, we are yet to recover from this experience,” Otema said showing a scar on his stomach that he said was sustained when the rebels attacked his village in Kilak, Amuru district, in 2003, though he declined to disclose his village’s name and have his photograph taken for fear of being identified.

William Byansi, the lead counsel for the prosecution blamed the Defense for the adjournment. “This is very disappointing. The Defense is playing delaying tactics. Every time we adjourn, that is an additional cost to the government which has spent a lot of money in this case,” he said. “Our hope is there should be no further adjournments. The world out there is watching and demanding justice,” he added. 120 prosecution witnesses are lined up to testify against Kwoyelo when the trial resumes.

Presiding Judge Persis Jane Kiggundu stated that the reason for the adjournment was that the Defense had presented the intended sureties documents late to prosecution. Hence, prosecution prayed to be given time to scrutinize the documents. The second reason, she said, was that the counsels for the victims needed to be granted some time to consult with the listed victims who should have attended the trial proceedings. Henry Komakech Kilama, the lawyer representing victims in the trial said: “The victims want an expeditious trial but they have to be consulted on every step in this matter. We are now going to consult them.” He however declined to discuss how many victims are expected to appear in court to testify against Kwoyelo.

Meanwhile, the victims and the accused wait. One of the victims who asked her name not to be disclosed for security reasons said: “I lost my mother, father, two brothers and a relative who had come to visit us when Otti [Vincent, former LRA Deputy Commander] attacked our village in Atiak. We are looking for an opportunity to tell our story on what happened because some of the people that killed our people, we know them.” She declined to say if she suspected Kwoyelo to be among the attackers. “We want them to be arrested and sentenced or they hang them,” she added.