For several weeks, a document of rare importance has been circulating behind the doors of the Assembly of People's Representatives. It comes from the government, or more precisely from the Ministry in charge of Relations with Constitutional Authorities, Civil Society and Human Rights. It is entitled: "Preliminary draft of an organic law on the completion of the transitional justice process, the establishment of general reconciliation and the consolidation of national unity". The copy that JusticeInfo.net was able to obtain is dated March 8, 2019. It is addressed to the Chairman of the parliamentary group of the Ennahda movement, a conservative Islamist party, Noureddine Bhriri.

This is only a draft bill, which has not yet been adopted by the Ministerial Council and has simply landed on all parliamentary group leaders for consultation. But the initiative is proving to be a threat to the still partial achievements of transitional justice in Tunisia. Because it is similar to an amnesty law for all persons currently being prosecuted for violations committed during the dictatorship and whose cases - nearly 170 - are pending in specialized criminal chambers. Halim Meddeb, lawyer and project coordinator at Avocats sans frontières (ASF), describes this initiative as a "diversion of the process".

Apologies in exchange of no prosecution

The document, which covers 46 articles, provides in its article 2 for the reparation of all victims. It proposes the creation of two reconciliation commissions. The first would act on human rights violations. It would be composed of 9 members, one third of whom would be appointed by the President of the Republic, a second third by the Head of Government and the last three by the Speaker of Parliament. The second would focus on corruption and embezzlement cases. It would also be composed of members appointed by the executive and legislative branches.

According to article 12 of the draft law, "all cases relating to human rights violations referred to the specialized chambers" would be filed "with the registrar of each court concerned" who "must transmit them to the reconciliation commission". Article 19 reveals the real meaning of the creation of this new strictly administrative structure: "The alleged perpetrator shall apologize to the Reconciliation Commission for the facts attributed to him within 15 days of being notified. A person who is found innocent by the reconciliation commission of any violation is exempt from apology. In this case, reconciliation takes place by law.”

Article 20 goes even further: "Reconciliation occurs as a result of the apology, as cited in article 19. The procedure is written in the form of a final decision which is not subject to any appeal, including an appeal to the Supreme Court and an appeal for abuse of power. A copy of the decision shall be served on the accused. »

A violation of fundamental principles

For the professor of public law, former dean of the Ariana Law School in Tunis and former Minister of Justice, Mohamed Salah Ben Aissa, this project violates two fundamental principles. "The first concerns the autonomy of the judiciary. The courts in full operation, which have been hearing victims and witnesses and summoning defendants since last May, would be dismissed without any justification and without responding to an issue of general interest. The second is a direct violation of the Constitution since it prohibits both the right to a fair trial and the right to a second hearing, since the conciliation decision is not subject to appeal.”

After four and a half years of work by the Truth and Dignity Commission (IVD), some 20 public hearings broadcast on local television channels, more than 60 000 hours of closed-door hearings of human rights victims, dozens of judges trained to rule in specialized chambers and, finally, a final report of the IVD that has just been published online, the authorities seem to want to ignore all this. They propose something else: a cheque for reparations against truth, criminal responsibility and institutional reform.

"Reconciliation has been misused for some time," says Antonio Manganella, director of ASF's Tunis office. "This is a historical mistake! This principle is not an objective but the result of revealing the truth and fighting impunity. On the other hand, the reasons that triggered the Revolution are still there: the centralization of the State, a poor distribution of wealth, endemic corruption, a police force that has not changed its codes and habits.”

However, this legislative initiative is not the first of its kind. In the summer of 2015, the President of the Republic submitted to the Council of Ministers a law on economic and financial reconciliation, adopted two years later by Parliament with a few amendments. Nor is it a real surprise to civil society organizations that support transitional justice and have published, on April 9, the Day of the Martyrs, a manifesto signed by 28 associations that say they reject "any law that would undermine the transitional justice process and threaten its existing mechanisms".

All these Tunisian and international NGOs - including the Tunisian League for Human Rights, the Association of Tunisian Judges, Al Bawsala (Tunisian NGO promoting citizen participation), the World Organisation Against Torture, the Association of Tunisian Women for Development Research, Human Rights Watch, etc. - were expecting the government to attack. Has the President of the Government not assured, since December 2018, that the work done by the IVD was not satisfactory and that the Government would propose a project to "correct the process and complete it, a project in the sense of true reconciliation", in the words of Youssef Chahed? Its current political ally, Rached Gannouchi, head of Ennahda, has consistently referred to "integral reconciliation" in all his recent speeches.

It is still difficult to expect such legislation to be passed by the summer. But the project could well embody an electoral offer for Youssef Chahed and his very young and promising party Tahya Tounes (Long live Tunisia), in preparation for the general elections in the autumn. All the parties that will support this legislative initiative hope to draw profitably on the electoral pool that has remained loyal to former President Ben Ali and that loathes any justice that digs into the crimes of the past. "In case this draft is adopted, even former President Ben Ali can use it. According to the text, no one can deny him a decision of reconciliation!", denounces lawyer Halim Meddeb.

Title of the document: "Preliminary draft of an organic law on the completion of the transitional justice process, the establishment of general reconciliation and the consolidation of national unity". 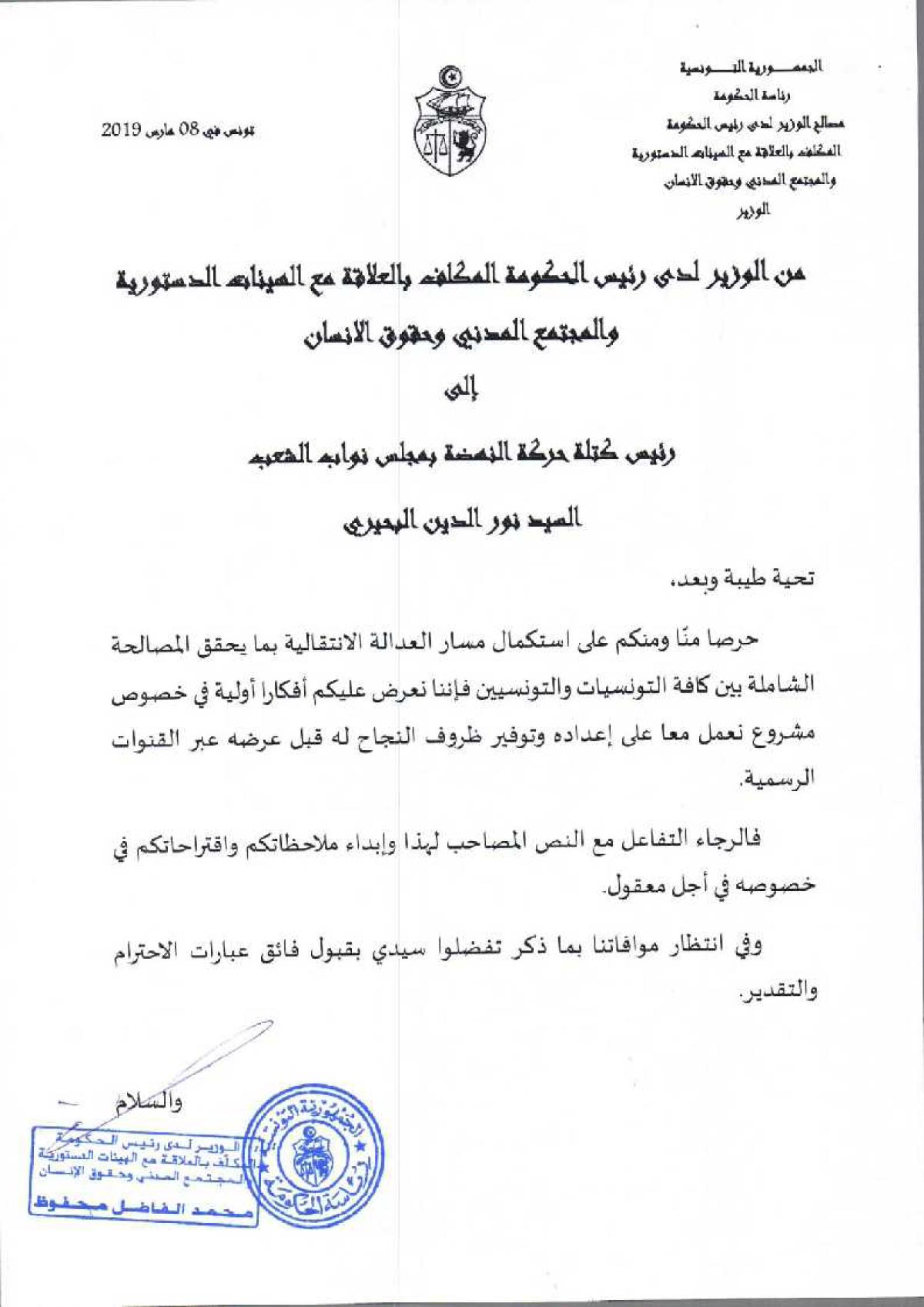 Publisher of the document: Ministry in charge of Relations with Constitutional Authorities, Civil Society and Human Rights.