Earlier this year the former president of Ivory Coast, Laurent Gbagbo, was acquitted by the International Criminal Court (ICC) after having been detained in The Hague for more than seven years. His former Youth minister Charles Blé Goudé was set free as well. The acquittals were the last in a series. For years the Office of the Prosecutor (OTP) has been marred by problems with investigations, management issues and scandals that gravely affected its reputation. So far, since the ICC’s start in 2002, just three accused have been found guilty by the ICC, while the cases against twelve other defendants have been closed – before, in the middle or at the end of their trial – because the evidence was lacking.

But now it is the judges who are at the centre of controversy. In January The New York Times wrote that a number of ICC judges filed a lawsuit against their own court at the tribunal of the International Labour Organization. Annually earning a tax-free salary of 180,000 euros, they are demanding a pay rise of 26 percent, retroactive compensation, more pension and damages “that could run into the millions”, according to the NYT. The lawsuit is led by the president of the ICC, Chile Eboe-Osuji (who earns an extra 18,000 euros a year as president). Although twelve judges out of eighteen haven’t joined the lawsuit, the case harms the image of the court. 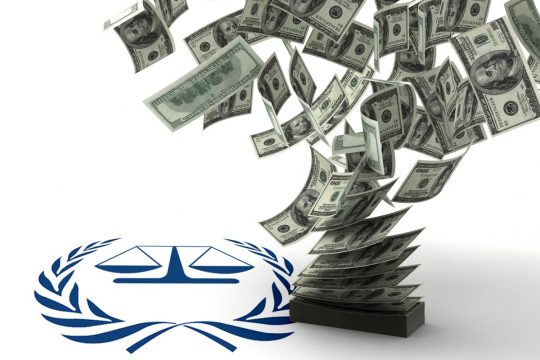 Money Matters at the ICC

The news about the salary conflict was followed by a scandal featuring judge Kuniko Ozaki of Japan. She is part of the Chamber handling the trial against Congolese former warlord Bosco Ntaganda, who surrendered himself to the court on 22 March 2013. His trial started on 2 September 2015 and the closing statements took place last August. The judges are now writing the judgment. Ozaki’s term had ended in March 2018, but she stayed on to complete the trial until a verdict is reached.

Suddenly, on 7 January 2019, Ozaki sent an internal memorandum to the presidency of the court asking to resign “as a full-time judge” as of 11 February 2019. It was for personal reasons, she wrote. One week later, on 18 February, she informed her colleagues that she had been appointed as Japan’s ambassador to Estonia and that her diplomatic duties would start 3 April. “It is my firm belief that my new responsibility would not in any way interfere with my judicial function,” she stated. Ozaki asked permission to combine the two jobs, and if that was not possible, she would simply resign from the ICC.

The judges organised a plenary meeting on 4 March 2019 to discuss the matter and decided by a majority of 14 judges that the combination of jobs “does not violate any aspect” of Article 40 of the Rome Statute which deals with the independence of the judges. The article says that judges “shall not engage in any activity which is likely to interfere with their judicial functions or to affect confidence in their independence” and that they serve “on a full-time basis” not engaging “in any other occupation of a professional nature.” A minority of three judges objected to Ozaki’s diplomatic position saying it was “evident” that a judge performing an “executive or political function” for a government “was entirely likely to affect public confidence in judicial independence.”

An email from Japan

On 1 April the defence lawyers of Ntaganda said that Ozaki should be disqualified because of her diplomatic appointment and her conduct in this affair. The team believed there was “a serious risk” that the right of their client to a fair trial was violated. The defence’s request for a temporary stay of proceedings to litigate a disqualification was however denied by the Trial Chamber.

On 30 April the defence team asked the presidency to reconsider the decision that the diplomatic job of Ozaki was not a violation of Article 40. The lawyers stated that her service for the government of Japan “creates the appearance that she is not independent” and that a “reasonable observer” would suspect that an ambassador would like to avoid controversy if she has to choose between a conviction or acquittal in “a high-profile case.” Her diplomatic job is “clearly incompatible with her judicial duties,” they argued.

One day later, the presidency disclosed that judge Ozaki had resigned as ambassador. In fact the court had already been informed on 23 April by email by the Japanese ministry of Foreign Affairs about her resignation, which itself had taken place on 18 April.

It is unlikely, however, that this saga ends here. The defence has repeated its request to the presidency to disclose documents and information related to the affair.

No investigations in Afghanistan

While the Ozaki-scandal was unfolding, the court published the long awaited Afghanistan decision. On 20 November 2017, the prosecutor had requested permission for a full criminal investigation into international crimes committed by the Taliban, Afghan security forces, American military and CIA officials in Afghanistan and in secret CIA-detention-centres in Poland, Romania and Lithuania.

Meanwhile the United States government had openly threatened the court if it would dare to prosecute Americans. In a scathing speech last year John Bolton called the ICC “ineffective”, “unaccountable”, “outright dangerous” and “illegitimate.” The U.S. National Security Advisor warned the ICC that his country would do anything to stop the court from investigating Americans. Judges and prosecutors would be banned from entering the United States, they would see their bank accounts frozen, and they could even be prosecuted. The same would happen to companies and states assisting an ICC investigation.

On 4 April 2019 the U.S. revoked the visa of ICC prosecutor Fatou Bensouda. A week later, on 12 April, an ICC Pre-Trial Chamber rejected the prosecution’s request to start an investigation in Afghanistan. The three judges agreed there was “a reasonable basis” that crimes within the jurisdiction of the court were committed, but they said that it was not in the interest of justice to pursue this case. The “complexity and volatility of the political climate still surrounding the Afghan scenario make it extremely difficult to gauge the prospects of securing meaningful cooperation” which is needed for successful investigations and the surrender of suspects, the judges stated. They suggested that the lack of results would create “frustration and possibly hostility vis-a-vis the Court” among victims. The judges added that an Afghanistan investigation would require financial and human resources, which will be at the detriment of “scenarios” that “have more realistic prospects to lead to trials and thus effectively foster the interests of justice.”

The decision triggered an avalanche of criticism. Param-Preet Singh, associate international justice director of Human Rights Watch, said it was “a devastating blow for victims who have suffered grievous crimes without redress.” She pointed to the fact that “the judges’ logic effectively allows member countries to opt out of cooperating with the court and sends a dangerous message to all governments that obstructionist tactics can put them beyond the court’s reach.”

Academics commenting in tweets and blogs were divided in pragmatic and principled approaches. Alex Whiting, professor of practice at Harvard Law School and previously working for the ICC’s prosecution, showed some comprehension in his Just Security post pointing out that, as “a fledgling institution, it might be necessary for the Court to build and establish itself with small steps, focusing on those situation where international support will allow it to succeed.” But Sergey Vasiliev, assistant professor at the department of criminal law at the University of Amsterdam, wrote a two-part piece under the ominous title: “Not just another ‘crisis’: Could the blocking of the Afghanistan investigation spell the end of the ICC?”

What and whom a French judge likes, or not

If that was not enough, an old speech from 17 May 2017 that the French judge Marc Perrin de Brichambaut gave before Chinese law students at the Peking University Law School created upheaval. In his talk the judge made a range of derogatory remarks. He stated that it is European countries that are paying the bills for the ICC, while the African countries “provide the suspects.” The judge, who is of course well paid himself, talked about one of the victims’ lawyers and said he made a good choice because working on the case against LRA-commander Dominic Ongwen means he is “now in business for the next few years.” He commented on defence lawyers David Hooper and a “woman lawyer from Paris” saying she is “even more of a pain than Mr. Hooper because she shoots at everything that moves on the other side, but she never met a victim either, but she’s very effective in terms of defending their interests and makes the life of the chamber a little bit unpleasant occasionally. So, I don’t like Madame Mabe at all, neither do I have enormous respect for Mr Hooper,” he said, probably referring to Catherine Mabille, defence lawyer for Thomas Lubanga Dyilo. In the meantime, on April 10, Mabille filed a motion to disqualify the judge because of his remarks related to the reparations proceedings in the Lubanga case which he is presiding.

And there was more. A point that Kevin Jon Heller, associate professor of Public International Law at the University of Amsterdam, particularly wanted to raise in a blog for Opinio Juris.

The ICC will never be seen as credible if its judges openly announce, sincerely or not, that they feel free to ignore important provisions in the Rome Statute they personally dislike.

In his 2017 talk in Beijing Judge Perrin de Brichambaut had disclosed that he and the other two judges conducting the trial against former Congolese politician Jean-Pierre Bemba Gombo and four others accused of bribing witnesses, had agreed to refuse interlocutory appeals. Heller points out that the Rome Statute allows parties to appeal a “decision that involves an issue that would significantly affect the fair and expeditious conduct of the proceedings or the outcome of the trial.” Referring to the judge’s remarks Heller says it is “impossible to overstate how reckless and damaging statements like these can be. […] The ICC will never be seen as credible if its judges openly announce, sincerely or not, that they feel free to ignore important provisions in the Rome Statute they personally dislike.”

No less than four controversial matters came up during the first months of this year: the salary lawsuit, the Ozaki scandal, the refusal of the Afghanistan investigation and the French judge’s talk. Considering that judges are selected for their impartiality and integrity, if every month their conduct leads to public commotion and doubt, the court should become very worried.