Social media interns of various states have been working their socks off in The Hague this week, composing positive tweets about their employers’ impeccable support for justice, during the just-finished International Criminal Court annual meeting of its members. 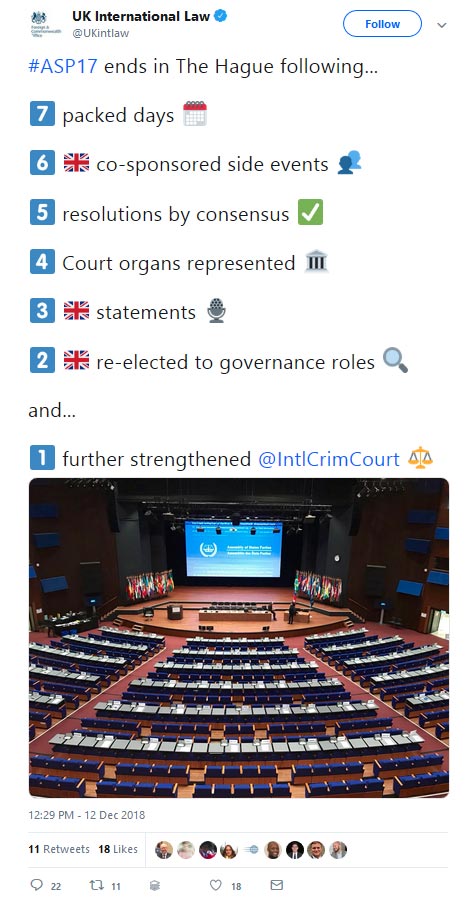 But it wasn’t enough to convince the court’s funders. ICC member states have agreed a budget increase this year of less than ½ percent, which is in fact a cut to the court’s money, when inflation is taken into account.

The International Criminal Court’s administration had deliberately asked for no increase. Only the Office of the Prosecutor and the Victims Trust Fund had requested additional funding to do their jobs – investigate and prosecute massive human rights violations, and sort out reparations for victims.

So how committed are the court’s members to this international justice project?

A small group of ten states – Argentina, Belgium, Costa Rica, Finland, Liechtenstein, Luxembourg, The Netherlands, Slovenia, Sweden and Switzerland  –  expressed their disappointment at the result via a joint statement during the budget debate. “Twenty years ago,” said the countries’ statement, “we had a common vision of what international criminal justice should be, and today, in a difficult context, we must ensure that the Court has adequate resources to meet the growing demand for justice in order to ensure that victims have access to the justice they deserve.” As the Permanent Representative of the Netherlands to the ICC Paul van den Ijssel told JusticeInfo.net: “The budget is an important signal, because you put your money where your mouth is.”

The UK on the offensive

Outside the Hague, the US government is making very clear that it intends to block any initiatives of the ICC that may threaten its hegemony or any of its close allies. Secretary of State Michael Pompeo called the ICC a “rogue international court”.

Inside, the United Kingdom – under preliminary examination over alleged war crimes in Iraq – assured the court at the annual meeting that it sought to strengthen the Rome Statute system. Then it continued: “We cannot bury our heads in the sand and pretend everything is fine when it isn’t. The statistics are sobering. After 20 years, and 1.5 billion euros spent we have only three core crime convictions. As others have said, and I quote “it is undeniable that the Rome project still falls short of the expectations of the participants at that ground-breaking conference in Rome”. The time has come for States to take a fundamental look at how the Court is operating.” The UK representative Andrew Murdoch warned that “the Court is not there to second guess, still less to review, the decisions of competent, functioning national systems of justice.”

Then came the time to target prosecutors and judges for their questionable behavior. “We welcome the steps taken by the Prosecutor to investigate the media allegations surrounding the former Prosecutor that surfaced twelve months ago,” Murdoch said, referring to allegations of misconduct and possible offenses connected to the former Prosecutor Luis Moreno Ocampo. “We urge her [Fatou Bensouda, the current Prosecutor] to complete speedily a comprehensive and transparent investigation and to report fully to the Assembly. This will be crucial to the credibility of the Office of the Prosecutor and the wider Court.”

He then turned to judges and one of the ICC’s open secrets: “The Court is in danger of spending more money on internal litigation, including litigation on salaries, than on victims. This will do nothing to enhance the reputation of the Court outside its walls”. Here Murdoch was referring to a group of ICC judges who have taken their complaint about salaries and pension to an employment tribunal.

Even William Pace, the outgoing convener of the NGOs Coalition for the ICC and one of the court’s biggest supporters for twenty years, would not come to the rescue. “It’s very unfortunate that six judges out the forty or so who have worked there are claiming that the ASP is mistreating them by not giving them more than the 200 thousand euros, plus benefits, plus pension, etc., they already earn, and I hope it will remain a minority effort and not evolve into something destructive for the court,” he told JusticeInfo.net.

The judges’ move comes on top of a long series of adverse judgments against the court at the International Labor Organization Administrative Tribunal (ILOAT), costing states thousands in compensation payments, particularly in relation to the ill-fated reorganization of the court, known as ReVIsion, championed by former registrar Herman von Hebel.

“I have seven remaining cases against the ICC,” explains Cyril Laucci, former advisor to the court’s registry, all relating to the way he left the court. ILOAT has agreed with his arguments that the reorganization did not follow strict rules for how international organizations should offer alternative positions before firing people. “I know about a group of 27 others, so maybe we are nearly 40 cases [on a similar basis], still to go.”

The UK’s sharp critique is a touch “simplistic”, says Matt Cannock, head of Amnesty International’s Centre for international justice in The Hague, and “it’s coming from a state that has applied severe budgetary pressure to the court. But, at the same time, there is a real optics issue for a court, if it is seen to be paying out more money in administrative settlements than it is in reparations to victims.”

One of the truisms you hear regularly in discussions about the ICC is that the Rome Statute is only 20 years old, and the court is younger still. But the apparent money-wasting that is now being revealed bolsters the positions of states who – for a variety of reasons – may be reluctant to provide it with more funds.

“I think we would have liked to have seen the court got more of its ‘growing up’ already out of the way” agrees Cannock. “At the same time, perhaps, with some of the pressures the states put on it, they make it quite difficult for it to grow how it would like to. It’s one thing to ask the court to grow, but when states are strangling it through the budget that will stymie its work as well.”