Three years after the Colombian government signed a historic peace deal with the Revolutionary Armed Forces of Colombia (FARC), peace remains elusive in many areas. In the Catatumbo region close to the Venezuelan border, for example, high levels of insecurity persist. Highlighting the complexities of the conflict and its underlying dynamics, Catatumbo is one of the regions in Colombia with ‘the highest cultivation of coca’ – the key ingredient of cocaine. Here, and in places such as Cauca and Norte de Santander, armed groups continue to fight for control of lucrative drug-trafficking routes and to target anyone who stands in their way. The continuing attacks on social leaders are just one illustration. Colombia therefore finds itself ‘in a unique position in trying to reverse the damages caused by a conflict that has not only not ended, but is in fact intensifying and increasing in complexity’.

From a transitional justice perspective, one of the major challenges facing the Colombian government is how to ‘repair’ the multiple harms done to victims of the armed conflict in an environment where ongoing harms are occurring. Focusing on this key question, this article emphasizes the importance of transformative reparations. In so doing, it argues for an ecological reframing of transitional justice that gives more attention to the broader social environments with which victims interact.

The limited results of the Justice and Peace Law

The armed conflict in Colombia has had a devastating impact on human lives and livelihoods. Brutal acts of violence committed by all sides – including paramilitaries, government forces and guerrilla groups – have resulted in more than 262,000 deaths, 8.1 million internally displaced people and 8,794,542 registered victims. The persistence and recurrence of these abuses over more than half a century is crucial for explaining why transitional justice processes and armed conflict exist side by side in Colombia. This has necessarily made transitional justice work especially challenging. In particular, there is a difficult balance to be achieved between the imperatives of peace and justice.

With its origins in ‘previous legislative attempts to end the armed conflict’, the 2005 Justice and Peace Law prioritized peace over justice. It offered reduced prison sentences to demobilized paramilitaries from the United Self-Defense Forces of Colombia who made full confessions and contributed to reparations for victims. The results, however, were limited. The International Center for Transitional Justice notes that ‘By June 2016, over 4,400 former paramilitaries had passed through the Justice and Peace tribunals, but only 49 verdicts had been issued’. Violence and insecurity continued, and the emphasis on demobilization detracted from justice and the needs of victims. The complexities of the reparations process – which required that victims establish their perpetrators’ culpability through legal proceedings – meant that three years after the law was adopted, only 24 individuals had received damages.

Following up on the 2011 Victims and Land Restitution Law

A further challenge of ‘dealing with the past’ in an environment of ongoing and long-term violence is that transitional justice processes are forever 'catching up', progressing at a much slower pace than the dynamics of the conflict and abuses that they are seeking to address. From a reparative justice perspective, a key piece of legislation is the 2011 Victims and Land Restitution Law. This Law separates the award of reparations from criminal proceedings, in contrast to the Justice and Peace Law; and it defines reparations 'comprehensively' (article 12), in keeping with the 2006 United Nations Basic Principles on the Right to a Remedy and Reparation for Victims of Gross Violations of International Human Rights Law and Serious Violations of International Humanitarian Law. In a climate of ongoing violence, which former president Álvaro Uribe always attributed to 'terrorist activities', it is significant that the 2011 Law ‘gives official political recognition to the Colombian armed conflict’. While this creates new political spaces for acknowledging the diverse experiences of victims, reparations have been paid ‘to fewer than 11 percent of all war victims, or 986,971 people, according to Colombia’s Victims Unit in June [2019]’.

Colombia has recently entered a new phase of transitional justice work through the creation of the Special Jurisdiction of Peace (JRP). Established as part of the 2016 peace agreement, the JEP has been described as ‘another step forward in the fight against impunity in Colombia’. The JEP started its work in March 2018 and notwithstanding its focus on prosecutions, its mandate has an important reparative element. Perpetrators who seek to repair some of the harm done to their victims, for instance, can receive a reduced sentence. While insufficient time has passed to make a fair assessment of the JEP, it is operating in a highly sensitive political environment. In March 2019, for example, President Ivan Duque sought changes to six of the 159 articles that constitute the draft statutory law on the JEP, including those relating to the punishment of perpetrators. His objections constituted ‘an unprecedented situation’; a president had never previously refused to sign a statutory law approved by Congress and the Constitutional Court. Ongoing violence and instability in Colombia could also potentially compromise the work of the JEP. The International Commission of Jurists, for example, has expressed concerns about the security threats faced by victims and witnesses who testify. The challenges that the JEP faces, however, are also an opportunity for thinking innovatively about how to do transitional justice work – and particularly about how to deliver reparative justice – in an environment of ongoing conflict, insecurity and violence. 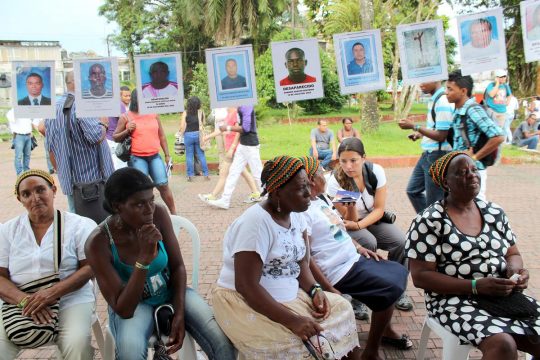 More time to redress Colombia’s victims. The question is how.

Transformative reparations: We have to be reborn

The notion of repairing harms is primarily a backward-looking process, yet there are harms that blur the temporal boundary between past and present. During a scoping visit to Colombia in February and March 2018, I had the opportunity to meet a number of women who had experienced conflict-related sexual violence. The majority of them were internally displaced, many were living in poverty with inadequate access to healthcare and some of them – due to their role as social leaders – had received death threats and were now part of government security protection schemes.

This article’s central argument is that when a social and political milieu is itself perpetuating or fostering harms, it is not enough simply to speak about reparations. Those reparations need to be transformative. The purpose of transformative reparations is not to return victims to the status quo ante bellum and to lives that may have already been blighted by poverty and discrimination. Rather, the aim is ‘to change or "transform"’ the circumstances in which they live, and thus to respond to past harms within the framework of a broader temporal whole. As one interviewee emphasized earlier this year, ‘You see, there are so many of us who had to leave our homes, our jobs and children. Now we have to rebuild everything, we have to… be reborn’.

The concept of transformative reparations, however, is not a stand-alone concept; an individual’s circumstances cannot be transformed in the absence of wider social transformation. Margaret Urban Walker argues against ‘the most ambitiously transformative aims’, maintaining that such an agenda threatens to bypass or displace reparative justice as a distinct and distinctly victim-centered ideal…’. Yet, a victim-centred ideal is inherently problematic because it neglects the wider social ecologies – including families, communities, local institutions and belief systems – that shape victims’ everyday lives. Illustrating this point, one interviewee emphasized: ‘For a long time I’d forgotten all my dreams – I had to start dreaming again’. Giving monetary reparations to an individual victim will have limited transformative effects in this regard if the social environment does not encourage him/her to dream – or facilitate the realization of those dreams.

Ongoing violence is not an obstacle to successful transitional justice

The aforementioned Victims and Land Restitution Law itself utilizes the concept of transformative reparations. This transformative focus, Sanne Weber notes, ‘is understood as the intention to “eliminate patterns of discrimination and marginalisation…to prevent repetition” and “restore or reconstruct a stable and dignified life project for the victims”’. Transformation, however, is about more than political and structural change. It is also about the transformation of the more immediate environments within which victims interact, and about empowering them to contribute to the transformation of those environments. One interviewee, for example, explained: ‘I’ve come back into society because I want to help other women in my community. Above all, I want to support the women, right?’

Ultimately, it is argued that the challenge of repairing harms in a context of continuing harms requires an ecological reframing of transitional justice. Fundamentally, transitional justice processes should give more attention to the wider social ecologies that form an inextricable part of individual victims’ daily lives. Within these ecologies, there are crucial resources that should be utilized and harnessed to aid the process of repairing harms and building adaptive capacity to shocks and stresses. In conclusion, an environment where there is ongoing violence and insecurity does not have to be an obstacle to successful transitional justice work. Rather, it presents a valuable opportunity to address ‘the neglect of the social in transitional justice’.

Janine Natalya Clark is Professor of Gender, Transitional Justice and International Criminal Law at the University of Birmingham, UK. Her research interests include conflict-related sexual violence, transitional justice, resilience, ethnic conflict and reconciliation. She has published three monographs and over 50 journal articles. She is currently leading a five-year research project, funded by the European Research Council, about resilience and conflict-related sexual violence. Her work has also been funded by the Economic & Social Research Council and the Leverhulme Trust.