Fatou Toufah Jallow sat in a packed hall of listeners as she narrated her story. In the audience were her mother, father and siblings. Like many who testified before Gambia’s Truth, Reconciliation and Reparations Commission (TRRC) since October 14, Jallow was a victim of sexual abuse. Except that hers was allegedly committed in Gambia’s most secured building, State House, by a man who carried the primary responsibility of the country’s citizens’ protection: president Yahya Jammeh.

“He said let’s see if you are a virgin. I started to apologise and I was saying: “I am sorry”. I don’t even know what I was apologizing for,” said Jallow, crying, before the TRRC. “He pulled down his pants and rubbed his genitals on my face. Yahya Jammeh decided to penetrate me. And before he did, he decided to inject me with a needle.”

At this moment the 30-some people in the public gallery went quiet. Jallow wiped her tears with a tissue. A team member of the Commission’s psychosocial support unit approached her. Her mother walked into the witness waiting room and came back shortly afterwards.

In Gambia as anywhere else, it takes courage to talk about sexual violence in public. Jallow, like many others who came out, has paid a price for her testimony. Yet she says she believes that silence has been devastating for the country. “Our education should empower us to change our ways and improve,” she said, discouraging the society’s culture of silence in cases of sexual violence.

Fatou Toufah Jallow was in a group of 22 Gambian girls who took part in a Jammeh-sponsored beauty competition in November of 2014. The winners were promised scholarships to different universities. Jallow was in a local teacher’s training institution, called the Gambia College, to pursue a Higher Teachers Certificate. She had already applied to several schools abroad and got a spot but she didn’t have enough funds to go there. The beauty pageant was an opportunity to land up in her dreamed university. She competed and won. She was declared the queen among tertiary level students.

Winning brought Jallow near the president, Yahya Jammeh. After three interactions with him at personal level, he offered to marry her. She was shocked and disappointed. She said she considered Jammeh a father who until the time of his marriage proposal had been playing such a positive role in her life. “I felt deceived. But I convinced myself that it [Jammeh’s proposal] was a mistake,” she said.

During Ramadan of 2015, however, Jammeh found Jallow’s rejection too rude to take. “He is a man who probably was not used to so many “no”. He could not take it that someone like me was rejecting him,” said Jallow. And that night, Jammeh forced himself on her. She fought until she could no longer resist. Within State House at that same moment, a religious gathering was taking place upon the invitation of Jammeh. Jallow recalled hearing the Quran being read. Jammeh had been conferred the title of “leader of the people of faith” in 2014 by Gambia’s Supreme Islamic Council. But as Jallow would recall, he could not care less. “He sodomised me,” she said.

It is after this ordeal that Jallow decided to leave Gambia for Senegal, from where she moved for Canada where she currently resides. 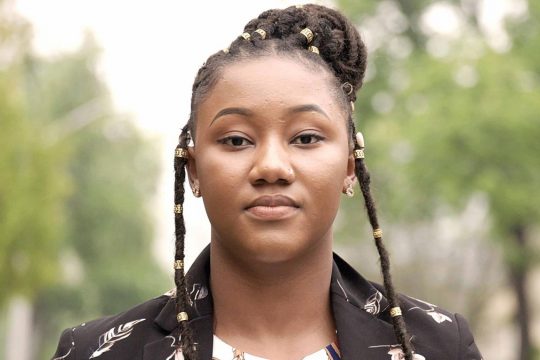 Over three weeks of testimony on sexual violence, the TRRC has already pieced together evidence indicating Jammeh’s involvement in sexual predation. According to witnesses, hiring girls for sex disguised as protocol officers was a habit of Jammeh. Toufah Jallow corroborated the allegation. On her second meeting with Jammeh at State House, he offered to make her a protocol officer. She declined. This would appear to be a modus operandi.

Tida Jatta Jarjue works at the gender unit of Gambia’s Ministry of Basic and Secondary Education. Before the Truth Commission, she said she was one of those who played a role as organizers of Jammeh’s beauty pageant. She said she had no knowledge that any of the girls would have been raped. However, “I personally know of two who participated in the competition and were later hired as protocol officers,” she testified. Jarjue and her colleagues were supposed to be the contact persons but in the end, she said, some of the girls were directly talking to protocol officers at the Office of the President. She also confirmed that the girls were used as ushers in several state events. Toufah Jallow too had that experience before she was allegedly raped.

Alagie Ousman Ceesay served Jammeh as chief protocol officer for many years. In this capacity, he was responsible for, among other things, the president’s daily activities. Working under him were a number of women who were unofficially referred to as the ‘Special Ladies’, Ceesay told the TRRC. They allegedly were usually brought to the presidency for Jammeh’s sexual desire. Ceesay said the usual procedure of recruiting these girls would require his involvement and the Public Service Commission’s. Instead, “it was an executive directive that selected these protocol officers. You don’t have a choice. There were lots of them who came,” said Ceesay. According to him, even the officials working at the State House at the time knew that the issue of protocol officer was a coverup. The girls were being used for something else. “It was an open secret,” Ceesay said.

Ceesay believes that Jammeh may have been suffering from mental health issues. “He is bipolar. Very unpredictable,” he said. “Sometimes, you will see certain behavior and wonder if a normal person would behave like that,” also stated Yusupha Sanneh, a former orderly of Jammeh who had revealed, a week earlier, that Jammeh received many protocol girls at his private residence in Kanilai.

Playing a leading role in the scheme was Jimbeh Jammeh, a protocol officer who was, according to a Human Rights Watch report published in June, one of the people in the middle of Jammeh’s alleged sexual exploitation of young women. By Ceesay’s account, Jimbeh Jammeh was very close to the president. Toufah Jallow also named Jimbeh as the person who always contacted her.

After Toufah Jallow was allegedly raped, a man she recognized as “King Papa” reportedly told her: “This is our president and we will do anything to protect him.” Jallow understood this to be a threat to silence her. The TRRC has identified King Papa as one Major Alieu Sanyang, a serving member of the Gambia National Army. But according to Jallow, the individual who was always at the center of Jammeh’s activities was Jimbeh Jammeh, who is now reportedly with Jammeh in Equatorial Guinea where the former ruler is exiled.

Ousman Ceesay also alleged that Jammeh was importing prostitutes from America, Ethiopia and Nigeria. As Ceesay testified, he had in front of him a paper containing names of protected witnesses of the Truth Commission. Referring to those names, Ceesay said: “I don’t know how Number 2 managed to bring these girls from oversees. They would be in the country for a week or two.”

On October 28, it was only the second time that an anonymous witness testified before the Truth Commission. She was heard by phone from an unnamed country. She said Jammeh attempted to force himself on her. She said she trusted him as a father and saw him as a Pan-Africanist but that the former leader exploited that trust. First, he offered to bathe her with a spiritual concoction. She agreed and did what she thought was meant to protect her. After that test, Jammeh allegedly pressed on. He invited her again. “He asked me to undress and this time, this was something different. He looked at me and told me that I looked like a primary school student. He started to touch my breasts and body. I remember pushing back and I started to resist him. He was angry and he said ‘take her out of here’,” the witness testified. She said that after resisting Jammeh’s advances, things changed. “He stopped offering me any kind of support. He stopped seeing me. He did not want to talk about the scholarship again. He did not want to see me again.” The anonymous witness said it was Jimbeh Jammeh who collected phone numbers of girls for Jammeh.