For the Congolese government, it seems this was the price to pay to restore peace in the eastern Ituri region. Overnight, Kinshasa released the first two ex-warlords to be convicted by the International Criminal Court (ICC) in The Hague. Thomas Lubanga was released from Makala prison on Sunday, March 15, just in time to attend, dressed in white, a Mass for the occasion at the parish of Notre Dame de Fatima. The next day, Monday 16 March, Germain Katanga left by the same door as the man he had previously followed to the ICC, and rubbed shoulders with in The Hague prison.

Transferred to the ICC in 2007 two years after his arrest in Kinshasa, Germain Katanga (nicknamed Simba, meaning lion in Swahili) was sentenced in 2014 to 12 years in jail for complicity in war crimes and crimes against humanity for having contributed, according to the ICC judgment, to the destruction of the village of Bogoro (Ituri) during an attack that killed around 200 people in 2003. Sent back to his home country in December 2015 to serve the remainder of his sentence, Katanga should have been released from prison in January 2016, thanks to a reduced sentence granted by the ICC for his good conduct and the regrets he expressed to victims. But Simba remained behind bars. In Kinshasa, Congolese military justice had also decided to prosecute him for “war crimes, crimes against humanity and participation in an insurgent movement” in the Ituri gold region. The prosecution of Katanga in February 2016 was reportedly dropped to allow his surprise release. 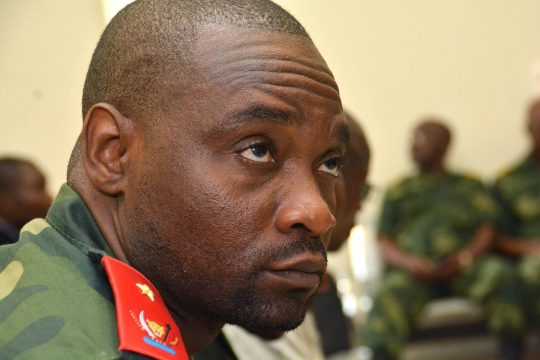 Lubanga will be remembered in the history of international justice as the first person convicted by the ICC. He was arrested in 2006 and transferred to The Hague the same year. Six years later, in 2012, he was sentenced to 14 years in jail for enlisting child soldiers in a conflict that ravaged Ituri in the early 2000s. Like his compatriot Katanga, Lubanga was transferred from The Hague to Kinshasa in December 2015 to serve the remainder of his sentence, until they were both released almost five years later.

Fates entwined in peace as in war

When he was released, Lubanga had served out his sentence and no new charges were being brought against him. “But in Kinshasa, his release was not a priority, let alone on the agenda,” says an official who did not wished to be named of the Union of Congolese Patriots (UPC), the political party Lubanga founded in 2001. All indications are that the release of the two former enemies is no coincidence. It is rather the result of the peace agreement signed on February 28 between the Congolese government and the Force de résistance patriotique de l’Ituri (FRPI), a powerful armed group once led by Katanga. This agreement, a copy of which Justice Info has obtained, stipulates that in return for the ceasefire and the surrender of the FRPI fighters, the government undertakes to “examine the cases of FRPI officers still under arrest in order to take appropriate measures, including their release”. A member of the NGO ACIAR which facilitated the negotiations told Justice Info that as well as its demands submitted to the government in November 2017, the FRPI sent a handwritten list of its former leaders detained in several prisons. “Germain Katanga was on the list of emblematic prisoners to be released which the FRPI gave us during the negotiations,” says the negotiator.

“Katanga’s release was considered a gesture of good faith on the part of the Congolese government in the implementation of the peace agreement,” agrees Xavier Maki, executive secretary of the NGO Justice Plus based in Ituri’s capital Bunia. It was first Katanga, from the Lendu ethnic group, who was to be released from prison at the end of these negotiations. But the decision was likely to cause unrest in Ituri among the Hema ethnic group (with whom the Lendu fought between 1999 and 2003), since their ex-leader Lubanga was still languishing in prison. Katanga’s lawyers say they were surprised by the release decisions. “This is neither a provisional nor a final release. Our client has been granted a favour. And the same had to be done for Lubanga in the interests of fairness, because if you release one and leave the other, it will not pass in the eyes of the communities,” Peter Ngomo Milambo, one of Katanga’s lawyers, told Justice Info.

Between 1999 and 2003, Ituri was torn by a civil war between the Lendu and Hema ethnic groups. But Christian Mbojima, a lawyer and law professor at the University of Bunia, thinks the liberation of these two ex-leaders could spark a process of reconciliation between the two ethnic groups. “Katanga and Lubanga are people who know the stakes of the armed conflicts in Ituri, having been actors in them. At the ICC, they had the opportunity to shake hands. And their release triggers a credible process of pacification in Ituri,” says Mbojima, who is also a spokesperson for the Lendu-Bindi elite.

“Their release is first of all a result of the agreement between the FRPI and the government. It is also an act aimed at bringing together communities that were once in conflict, because these two personalities are key players in the process of pacification in Ituri. Justice is also reconciliation. This is why the Ituri community welcomes their release,” adds Maki, from the NGO Justice Plus.

Reparation, the other face of justice

However, voices are calling on the Congolese state not to dismiss the issue of reparations expected by victims following the ICC convictions. Indeed, in March 2017, the ICC awarded 297 victims of Katanga US$250 in “symbolic reparations”, while in July 2019 Lubanga was ordered to pay US$10 million to compensate 425 victims. “The ICC’s Trust Fund for Victims can initiate reparations processes. But I believe that both actors should also be involved in the reparations process. When he applied for a reduction of his sentence (at the ICC), Lubanga pledged to become a key element in the reconciliation of communities in Ituri, to ask for an apology from all victims. And with that, I believe that the issue of reparations can follow its normal course, it is an important part of justice,” Maki stressed.

Asked about the issue of reparations by Justice Info, neither Katanga nor Lubanga wished to comment, indicating that they were still resting in Kinshasa after their ordeal in prison. Both said they were planning to travel to their native Ituri, although when is not yet clear.

Rwanda: What should happen to priests convicted for genocide?

Commission on Belgium’s colonial past: expert mission ends
Claude Sengenya
All reports from this author
Claude Muhindo Sengenya is Justice Info’s correspondent in the DRC. He is a trained professional journalist interested in humanitarian, security and transitional justice issues in the African Great Lakes region. He is a researcher and journalism teacher at the Université de l'Assomption au Congo (UAC), run by the Augustinians of the Assumption. He also works for other online media, including The New Humanitarian (ex-IRIN) and Actualité.cd. His articles cover the dynamics of conflict, peace initiatives, justice and reconciliation, to help rebuild post-conflict societies like the DRC.