“For the prison officers, death of prisoners is nothing. They always say: death of a prisoner is better than an escape,” testified Soriba Condé, a Guinean national who served a 14-year jail term in the security wing, the toughest section of Gambia’s Mile 2 prison, on charges of armed robbery. “If you have a problem with Yahya Jammeh and you are brought to Mile 2, you will not have peace,” he said to the Truth, Reconciliation and Reparations Commission (TRRC) on June 11.

In eight days of public hearings before Gambia’s TRRC, twelve prisoners and prison wardens have laid bare the realities behind the walls of Mile 2, more than three years after president Yahya Jammeh went into exile in Equatorial Guinea, following his electoral defeat in December 2016.

Mile 2 was built by the British colonialists in 1920 in a swampy area infested with mosquitoes and mangroves. Situated along the Banjul highway, the prison has three areas: security wing, main yard and remand wing. The security wing is partitioned from the central prison’s main yard by a thick wall of about four meters tall with a thick black metal door. Witnesses explained before the TRRC the fear that griped them any time they heard the noise of that door being opened. The sound meant that they were either going to be tortured or taken away and killed, they said.

Gambia’s central prison has never been a high-standard correctional center, but when power changed hands in 1994, things turned for worse, testified Lamin Korta, an ex-prison officer who retired from service in December 2019. Korta, 62, joined the Gambia Prison Service in August 1977. He left for another job and came back in 1996, two years after Jammeh took over.

The first fundamental change he witnessed was a new category of prisoners. “To enter the prison as an inmate you needed to have either a remand warrant or a convict warrant. But when I came back in 1996, there was a new column called ‘detainee’.” This, according to Korta, was introduced by the then prison director general David Colley. Under the Gambian law, any detainee should be released or charged beyond 72 hours. Under Jammeh, Korta observed, this was not the case.

Colley and Jammeh are natives of Kanilai, a small village in Foni, about two hours’ drive from Banjul. With barely any formal education, Colley started to work at Mile 2’s cafeteria, before Jammeh’s coup in 1994. He would later become a prison officer, and then a commissioner.

“Some came in a bad shape, after torture”

That’s when the members of Jammeh’s National Intelligence Agency (NIA) and of the hit squad called the “Junglers” began bringing people. A situation witnessed by Ansumana Manneh, 50, the current director general of Gambia Prisons Services, who appeared before the Commission on June 8. Manneh has been working within the prison system for close to three decades. “It was a tolerated practice that NIA would bring prisoners in without proper documentation or paperwork. Some came in a bad shape, after torture,” said Manneh.

He recalled that a prison warden, Ebrima Ceesay, was fired and punished for refusing to take Lang Tombong Tamba, a military implicated in the 2009 foiled coup, after he was taken by NIA and beaten and brought back in a very “bad shape”. Manneh said after the experience of Ceesay, everyone became afraid. “When you looked at our daily book, you realised that only number plates of vehicles that came for prisoners from NIA were entered. They only put their names as ‘NIA’,” testified Manneh.

Meanwhile, the nature of the detention conditions under Jammeh never evaded international scrutiny. In 2012, Gambia’s prison system came under the spotlight after Jammeh lifted a death penalty moratorium and executed nine death row inmates. Some had not exhausted their legal options and were illegally executed through strangulations by the Junglers, according to one of them, Omar Jallow, who appeared before the TRRC in July last year.

In November 2014, United Nations rights experts on torture and extra-judicial killings were denied entrance at Mile 2. Christof Heyns and Juan Méndez, who came upon the invitation of the Gambia government, were told that “under no circumstances would they be allowed to visit the security wing, where [among others] the death row prisoners are held.” “Due to denial of access to the Security Wing of Mile 2 prison to visit those sentenced to lengthy sentences, including the death penalty, an inference must be drawn that there is something important to hide,” said Heyns in a press conference after suspending their visit.

But while the UN experts may not have seen the inside of Mile 2, it appeared before the Truth Commission that torture was widespread.

Samba Doro Bah, 59, was detained at Mile 2 on a life sentence. Convicted in 2004 on murder charges that he still denies, Bah was taken to the security wing. “I spent one year six months in cuffs and shackles”, said Bah to the TRRC on June 15. Mile 2 had a place called “talk true”, where prisoners were taken for confession or to beat “the truth” out of them, Bah and several witnesses said. Bah was not taken to “talk true”, but he knew prisoners who were. “The place was near the director office. They said they put a nylon bag over their heads, put them down on a table and beat them.”

Another prisoner, Baba Galleh Jallow, has been detained in Mile 2 for 16 years. “[Director] David Colley was aware of [the torture]. If he was not, no one would dare do it,” he alleged, when he appeared before the Commission on June 15.

Both Jallow and Bah, convicted in 2004, claimed to have been shackled for 1 year, 6 months at a confinement cell in the security wing. 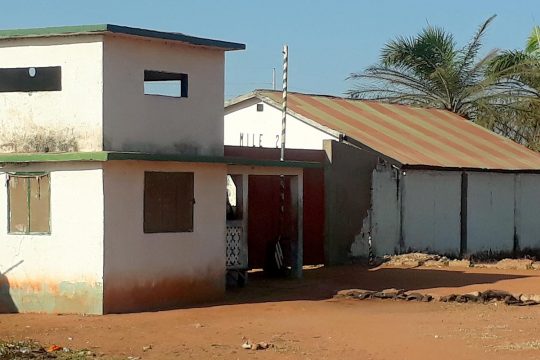 A good medic under Gambia’s terror

On the allegations of torture in Mile 2, Ebrima Jammeh’s name was most frequently cited and several prisoners labelled him as the “chief torturer”. In their account, Jammeh, a former director of operations at Mile 2, tortured several victims with at least two accomplices, Malang Tamba and Muhammed Jabbie.

While Jabbie did not appear before the TRRC, on June 17 and 18 Tamba admitted he had tortured two prisoners. Tamba also said he tortured Nfallou Ceesay, a tailor in prison whom he accused of sexually harassing a female prison warden.

- “This is unlawful, said Essa Faal, the TRRC lead counsel. Every section of corporal punishment shall be approved by the Minister of Interior. You have taken it upon yourself to punish Ceesay without following any due process.”

- “But I knew that if Ceesay was charged, his punishment was going to be worse than what he had,” answered Tamba.

- “Also, according to the Prison Act, you are not to implement corporal punishment without the presence of a medical doctor. Did you follow that?”

- “No sir. I have realized my mistakes. I have already apologized to Nfallou.”

- “I participated in beating Lamin Jah and Soriba Condé. This was meant to get the truth from them,” finally admitted Jammeh, explaining that a mobile went missing and cannabis was found on the suspects, who refused to speak the truth.

- “I apologize to all, particularly Jah and Condé. I couldn’t control my emotions, but I regret it,” Jammeh added.

Despite poor record keeping, the TRRC could establish that at least 41 people have died at Mile 2 from 1994 to 2017. At least two, Ebrima Joof and Lamarana Jallow, died as a result of torture, according to testimonies, while the main causes of death are the result of poor diet.

On that front, Fanta Sanneh, a prison “medic”, appeared before the TRRC on June 10. Sanneh had not formal nursing or medicine training. “I did not raise concerns about the diet of the prisoners despite knowing that prisoners were dying because of it,” admitted Sanneh. She also confirmed that inmates were being denied medical attention – in some cases after torture.

The Commission’s hearings on the prison system is expected to end this week.