Search
Special focus « The failure of the ICC Victims Fund »

On paper, the International Criminal Court (ICC) gives a central role to victims. Unlike most other iterations of international and ad hoc courts and tribunals, victims can participate in proceedings. Unlike any other, they can not only expect punishment, but also the hope for restoration of injustice through reparations.

When drafters came together to write the court's founding document in 1998 in Rome, there was a strong lobby by NGOs to place victims centrally. Fiona McKay, then working for a victims rights organisation, was there insisting to the drafters that the punishment of criminals was not enough. “There can be no justice until justice is done to the victims. And to deliver justice to the victims, the International Criminal Court must have the capacity to respond to their rights and needs,” she stated. McKay would go on to lead the ICC’s Victims Participation and Reparation Section (VPRS) for 10 years from 2005 to 2015.

Article 79 of the newly-minted Rome Statute enshrined the ideal of reparations: a new Trust Fund to be set up by states, for the benefit of victims. The details, though, were left to be fleshed out later. In 2002, the court’s very first Assembly (ASP) set up the Trust Fund for Victims (TFV), to be funded by voluntary contributions. By 2005 the ASP had established a secretariat and adopted regulations. Subsequent generations of court officials have continued to proudly declaim how the ICC is different and how victims are at the heart of its work. The ICC’s first president, Canadian Philipp Kirsch, in 2007 boasted of how the court is different in an academic article for the American University International Law Review.

“Victims have of course participated in other international proceedings, but largely as witnesses for the prosecutor or for the defense. In the case of the ICC, victims may participate in proceedings even when not called as witnesses. The Court also has the power to order reparations to victims including restitution, compensation, and rehabilitation,” he stressed. In November of that same year Kirsch told the United Nations general assembly that the Trust Fund for Victims was “fully functioning”.

The Trust Fund is “the jewel in the crown of criminal justice,” agrees researcher Alina Balta from Tilburg University’s Victimology department. But after spending years of her life looking at the best ways courts can deliver reparations to victims, she’s forced to conclude that “the actual implementation [of the ICC Trust Fund] hasn't really been thought through”. Lorraine Smith van Lin has worked with multiple victims groups while at the NGO Redress: “I think we all would recognise that there have been huge gaps between what the TVF was set up to do, aspirationally, and what it is doing in practice.” Reparations expert Luke Moffett from Queens University Belfast puts it succinctly: “It’s a mess.”

Apart from the Trust Fund, there is an alphabet soup of ICC organs tasked with relating to victims including the Victims Participation and Reparations Section, the Office of the prosecutor, the Office of Public Counsel for Victims, legal representatives of victims, the Victims and witnesses’ section. The TFV has meanwhile morphed into an entity of its own. Oversight lies officially with an elected Board of Directors. The Secretariat is the ‘Executive’ arm. It employs several staff members in The Hague and in the field, and its expenses are covered through the ICC’s regular budget.

The Trust Fund has a double mandate: implementing awards for reparations ordered by the court against someone who has been convicted, known as the reparations mandate; and providing victims in a situation being looked into by the court with physical or psychological rehabilitation and/or material support, known as the assistance mandate. Reparation orders are issued by judges, but assistance is defined by the TFV alone. Assistance should be funded by voluntary contributions, while reparations should be paid by the convicted where possible. The Trust Fund has become the lead agency for implementation of both reparations and assistance. It has more experience in the latter mandate than the former. 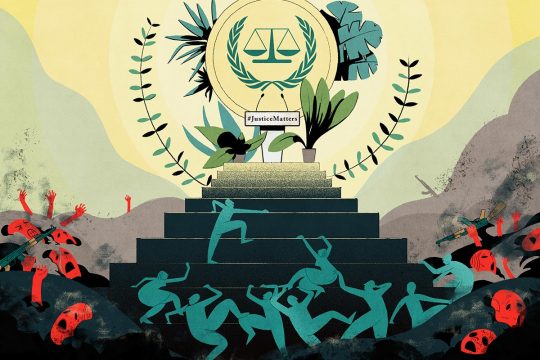 The court’s notoriously slow pace in trials and convictions has extended to reparations too. With years to anticipate the likely court orders in the handful of actual ICC cases, the TFV has complained that it lacks capacity. Pieter de Baan, the TFV’s Executive Director, says he has been making major changes: “We have put in place a management layer and a lot of the field capacity that we need to do things. There has been a major transition from 2015/16 to where we are now. We went from ten to twenty seven persons. And a lot of that has been in creating the capacity to implement both reparations awards and assistance programmes.”

The Independent Expert Review (IER) recently agreed that, “given its limited capacity and resources, issues of prioritisation between the two mandates are bound to emerge”. But critics say the TFV is neither managing its complex obligations, nor using its expertise in assistance to fully serve victims. “We understood that because of the delays in convictions and the length of time that trial proceedings would have taken, that the reparations part of the Trust Fund’s mandate would have come later and it probably would have been much more difficult than envisaged for a number of reasons, logistically and otherwise. But what we've seen is that even the assistance mandate has not filled the gaps that you would expect, that could have been filled,” says Smith van Lin.

Concerns around the TFV performance have emerged in a number of fora. For example, among judges: a Trial Chamber noted in July 2018, well after conviction in the Al Mahdi case (September 2016) that the TFV “has not yet gained command of its own mandate when operating within the judicial process”. It took the TFV more than two and a half years following the verdict to provide an updated implementation plan. In the first reparations case - Thomas Lubanga – it was over five years after conviction, albeit with the judges taking the majority of that time to decide on principles. Moffett says the malaise goes wider: “The court and in particular the Registry does not trust it, because the TFV rocks up in Bangui or Bamako and says we are going to help victims and it has no clue what is going on on the ground.”

A chronic absence of strategy

The independent experts suggest there is a bigger picture: a series of issues in “governance and management”, “ineffective oversight, and the absence of a fundraising strategy”. Combined with underspending and judicial delays, they say “donor confidence” has been eroded. Pieter de Baan demurs: “We are operating in quite a competitive donor market but I can say that we have maintained and actually increased the number of donors that we've been working with.” How far a lack of confidence in the Fund’s work permeates the donor community is difficult to assess. But there is a consistent drip of critiques by the oversight bodies within the court and by those set up by the states to check on performance.

The Fund’s own strategic plan for the period up to 2017 noted that improvement was needed in internal communications, clarity on roles and responsibilities, and an updated human resource structure. But the 2019 evaluation by the court’s independent oversight mechanism stated both that “these matters remained unresolved”, and that the TFV Secretariat faced even more challenges in its work now and had “difficulty in ensuring effective oversight”.

The court’s External Auditor also complained in 2018 “that the TFV’s structure could not ensure the required level of rigour in terms of legal expertise, traceability and documentation, especially given the number of potential victims, depending on the case, when implementing individual reparations awards”. The Auditor stated: “There was a risk of uncertainties as to the completeness, reality, and accuracy of the commitments, which, unless dealt with, could lead to significant difficulties in terms of certification”. The independent experts say that over the last two years, progress has been made “in remedying this situation”. But the fact this has happened at all, “points to insufficient oversight” over the TFV. Mama Kouaté Doumbia is the chair of the TFV board, responsible for oversight. She rejected firmly any criticism of the TVF for being slow, rather laying much of the blame at the doorstep of the court whose bureaucracy she says takes too long. “If the files linger on the court’s desk for them to give their advice on this or that programme that impacts our work, it impacts our capacity and even our competences even if the problem does not come from us”. She pointed also to a new approach - with her now at the TFV board’s helm - where the board was working on ways to speak more directly with the registry to hurry things along.

The critique on fundraising

The Fund’s failure to develop a general strategy document after 2017, and its lack of fully defined guidelines or principles to be followed in deciding on reparations or assistance projects cannot have inspired confidence. There are also no compilations of best practices and lessons learnt from implementation of the two mandates. The Committee of Budget and Finance has invited the court to start working, as soon as possible, on its full policy and framework on the reparation process.

Another curious lacuna identified in several reports has been the Fund’s own fundraising efforts. Although this was seen as a critical area back in 2016, it's only this year that a fundraising strategy has been developed after appointing a Fundraising and Visibility Officer during 2019. The CBF has recommended developing approach to private fundraising, a call echoed by the independent experts: “The TFV should develop as soon as possible a comprehensive and effective fundraising strategy that includes as targets private donors (e.g. corporations and large foundations and non-governmental organisations)…The strategy should further anticipate engagement with civil society organisations, aiming to benefit from their position as multipliers for the purpose of obtaining additional funds for the TFV.”

De Baan says this is now in hand: “We are developing a strategy to bring in private donors, working, again, in a donor climate which is not really helpful to anybody trying to get things done these days because of the Corona pandemic. We are investing quite significantly - and even more now than before - and making connexions to donors, making sure that they are on board. In trying, as you've seen, to come up with some innovative ideas on how to increase our revenue.”

A regular critique is that the Fund has not helped itself by not filling the posts they have budget for. At the end of 2019, the states’ Committee on Budget and Finance “noted with concern the constant under-implementation rate” of the TFV on its budget. The knock-on effect on implementation plans and execution of reparations projects, which “have taken and are taking an extensive time to develop, commission and realise”, was highlighted in the Independent Expert Review which devoted many pages detailing the TFV’s failings and five specific recommendations. Overall, the independent experts say, “profound delays exhibit the whole process”. “Victims”, the experts heard, “wait a lifetime”.