"The truth, no matter what you do, is revolutionary," he said at a public hearing in November 2016. At the end of September Joseph Gilbert Naccache, a left-wing Tunisian activist and former political prisoner, was due to attend the third trial session of the Young Perspectivists of 1968, of which he was one of the symbols, before the specialized criminal chamber in Tunis. But two judges had been transferred following the annual rotation of magistrates, so the Tunis chamber postponed all its hearings. The continuation of the trial did not take place and Gilbert Naccache, "Grandpa" to his friends, died aged 82 on December 26 in a Paris hospital of cerebral vascular complications.

Dissident Naccache never yielded to hatred or resentment despite the repression he suffered at the hands of the Bourguiba regime and the attacks, particularly racist, that he faced throughout his life. Along with humour and friendship, writing was probably his best therapy. He wrote with the freedom, intelligence and sincerity that distinguished him and which made him "a man of an intellectual stature that is now rare", according to the publisher Karim Ben Smail, or even "a monument of the Tunisian resistance", according to French political scientist Vincent Geisser. "To fight this kind of second death, to render what characterizes humanity, namely this uninterrupted chain of knowledge through the generations, I have only the word, the written word above all," says Naccache in the foreword of a book of memoires published in 2009. "What did you do with your youth?”

He also published "Le Ciel est par-dessus le toit" in 2005, "Vers la démocratie?” in 2011, and "Le Manchot" in 2013. But his masterpiece remains "Cristal", a powerful and very personal tale published in 1982, whose various chapters were clandestinely written on cigarette packets of a low-end local brand called Cristal. It was a way of taunting the prison and its guards, who made sure that all correspondence leaving Bourguiba's jails was subject to high surveillance and a complete search. In this book, Naccache lets us discover the sinister universe of the civil prison of Tunis, then of Borj Erroumi, dug into the caves of the Bizerte mountain, where he spent in all nearly ten years of his life. His detailed testimony is the first of its kind on the world of Tunisian prisons in the ‘60s and ‘70s. Almost cinematographic, his description of the jails, of the cells of those condemned to death who lived waiting for the fateful hour, of the deprivations, of the relations between prisoners, and of daily life in this microcosm is thorough, precise and very vivid.

A former Trotskyist and member of the Tunisian Communist Party, Gilbert Naccache belatedly joined the Perspectivist group. But this commitment led to three arrests in March 1968, February 1972 and December 1973. In his writings, he returns to the university of the 1960s, which "remained a place of relative democracy, like a free enclave in the middle of occupied territory”. Carried by the ideals of those feverish years when, all over the world, the irruption of youth was breaking down barriers and opening new possibilities, the young Tunisian revolutionaries did not think that the repression of the regime was going to fall on them in such a ferocious manner. 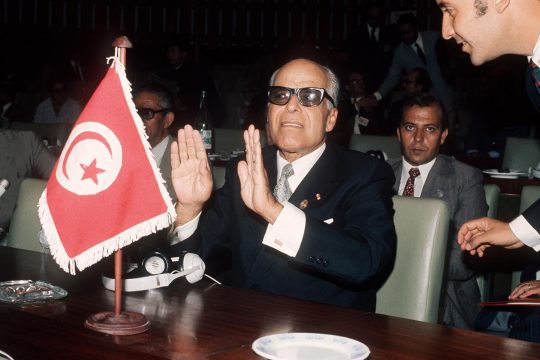 Tunisia and the repression of left-wing youth

"After a press campaign that seemed crazy to us, in which some did not hesitate to demand the death penalty for us, we went before a State Security Court specially created for us," he wrote in Cristal. "And to our amazement, we were given total sentences – because there were many charges – of sixteen years in prison for Nourredine [Noureddine Ben Khedher, a close friend and cellmate]. Five of these were for having recalled in writing the Marxist theory of the State, which was deemed a ‘conspiracy against State Security’, whereas the Marxist classics were sold freely in bookshops!”

Throughout his life, Gilbert Naccache was doubly sanctioned for dissent and for his Jewish origins. Despite his devoted commitment to civil liberties in Tunisia and his decision to return to Tunis in 1962 to help build the young independent state after studying agronomy in Paris, he says he was always perceived as a foreigner. But he knew how to elude this double penalty with a linguistic pirouette, a joke, or an insult in the Tunisian dialect.

In the early 2000s, Naccache was forced to leave Tunisia for France. His son, then a teenager, could no longer bear the anti-Semitic insults he faced daily. Naccache returned to his country with the revolution of 2011. The former Trotskyist kept his utopian views and revolutionary purity to the end. He took part in the reflection on a new constitution respectful of civil liberties, as well as in the first nascent debates on transitional justice. Gilbert Naccache and his wife, feminist and human rights activist Azza Ghanmi, were present at the sit-in protests of the wounded and families of the martyrs of the revolution. They were among the most active leaders of the group "Truth and Justice", created by some of the public present at the hearing of the Military Tribunal on April 12, 2014. On that day, the Military Court of Appeals pronounced dismissals and light sentences against 53 high-ranking security officials accused of using force against pacifist demonstrators of the revolutionary period. The couple felt much frustration from this verdict. In the spring of 2015, the "Truth and Justice" group took the initiative of circulating a petition against the economic reconciliation plans of then-President Béji Caied Essebsi. Then, on November 17, 2016, during the inauguration of public hearings before the Truth and Dignity Commission (IVD), Naccache testified.

Tunisians who watched this event on television discovered the exciting journey of this man eager for freedom, equality and dignity but who never claimed any status as a hero.

"Gilbert Naccache is dead. And now?"

Tributes poured in upon the announcement of Gilbert Naccache’s death. Some went so far as to call for a state funeral in his honour. The former political and intellectual prisoner was buried on December 30, according to his wishes, at the cemetery of the Free Thinkers of Bourjel, in Tunis. In a crowded cemetery, his death united all the families of the Tunisian left, illustrating the impact of this Resistance fighter on generations of activists who thought like him. Walid Kasraoui -- seriously wounded during the revolution and who has with others been on hunger strike for fifteen days calling for the official publication of the list of wounded and martyrs from the December 17, 2010 - January 14, 2011 events -- exclaimed in a funeral oration: "Gilbert, you have been more in solidarity with us than the state that is ours. We did not come here on our legs to pay you this last tribute, because we lost them at the moment of the revolution. It is our heart that brought us here.”

But these tributes were accompanied by bitterness. "Gilbert Naccache is dead. And now what?" lamented Elmy Khadri, an Islamist prisoner of conscience in the 1990s and president of the Karama Association (Dignity) which works for accountability for serious crimes committed in the past. In the eyes of many, Naccache left us, like so many other victims, before the very long transitional justice process could bring him justice and close his wounds.  The next hearing in the trial involving Naccache is scheduled for February 1. For him, if justice is done one day, it will be posthumous.