Of the three big demands - "Freedom, Peace, Justice" - that formed the slogan of the Sudanese revolution two years ago, the first two are beginning to take shape. The third one seems to be lagging behind. It is mentioned everywhere, but nothing is moving forward. "Yet transitional justice is one of the essential elements of the transition," says Mohamed Babiker Abdelsalam, dean of the Faculty of Law at the University of Khartoum, Sudan's capital. The "Constitutional Declaration" signed in August 2019, which describes the organization of the transition and power sharing between the military and civilians, "provides for a commission to work on the issue of atrocities committed by the regime of Omar Al-Bashir. The text is ready, but it has yet to be published", he says.

"The military still hold the levers of power and they are preventing the process, because they are responsible for the crimes": this is the unanimous conviction of the young revolutionaries we met. There is proof of this, according to them: the commission of inquiry set up in late 2019 to identify those responsible for the bloody repression of the revolution has still not delivered its conclusions. A first trial for the murder of an activist was held at the end of March 2021 in Atbara, flagship city of the revolution 250 kilometres north of Khartoum, but it has not convinced them. The defendants are "too small fish", they say. "Delays in the publication of investigations can endanger the transition, it's a question of trust," says Abdelsalam. "Transitional justice is a necessity for the victims.”

How can one investigate men accused of having committed or ordered war crimes when they are key figures in the transition, such as military members of the Sovereign Council, a collegial presidency composed of five military and five civilian members? Would that not put the transition in danger? How can there be trials for crimes during the war in Darfur when leaders of armed groups who may be responsible for them have just been appointed to the government -- such as Jibril Ibrahim, leader of the rebel group JEM (Justice and Equality Movement) -- in accordance with the Juba Peace Agreement, signed in October 2020 by the government and a coalition of ten rebel movements from different regions of the country. The contradictions are glaring.

"Signatures on paper are not enough. For peace, there must be equality on the ground, and justice. Those who have committed abuses must be judged. That's all," says Youssef Babiker Kafi, a 56-year-old technician from the village of Morta in the Nuba Mountains. This remote region in the south of the country is part of the regional state of South Kordofan. It was on the southern side during the North-South civil war from 1983 to 2005, which led to the independence of South Sudan in 2011. Remaining under Khartoum, it continued to suffer from the conflict between the military-Islamist regime of Omar Al-Bashir and the SPLM-N (Sudan People's Liberation Movement-North) until the revolution, which froze the situation. Having suffered repression and armed conflict, this region is one of the country's martyred provinces. One of the armed groups in the region signed the Juba Agreement and on March 28 the largest of them, the SPLM-N El Helou, initialled a Declaration of Principles. The people of the Nuba Mountains have been given some respite, but the delicate balance between peace and justice remains.

Reform of the justice system

"We are in danger of facing this question: peace or justice? If you focus on justice, then you risk disrupting the peace process," says the law school dean. Transitional justice is indeed one of the eight protocols of the Juba Agreement. But scepticism about its implementation is as strong as the expectations. The removal of yesterday's executioners is proceeding cautiously and all the more slowly because the province is far from Khartoum. Abdellatif Hassan Mohanna, a cell phone salesman and repairman in the market of Kadugli, capital of South Kordofan, willingly shows the photo of torture marks on his back. Arrested by the NISS (now partially dismantled and renamed GIS), Omar Al-Bashir's political police, he notes: "I have not yet seen anyone, no investigator, no one to question me and record my case. In any case, only civil society organizations can exert pressure. The government will not dare, because it would implicate too many important people."

This opinion is widely shared in the two regions, Darfur and the Nuba Mountains, which have suffered the bloodiest wars. Many, like Abbas Alawi, representative of the revolutionary coalition Forces for Freedom and Change (FFC) in Kadugli, are calling for international justice. "The judges of the ICC [International Criminal Court] are impartial," he said. "They will bring justice to the victims, and to the criminals. We have no confidence in the Sudanese judicial system which is weak and under-resourced. As for the judges, most of them are linked to the former regime."

In three decades, the National Congress Party (NCP) of Al-Bashir - indicted for genocide by the ICC and currently in prison in Sudan - has managed to get a hold on all jurisdictions and put its men everywhere, hence public distrust of the judicial system and the difficulty of necessary reform. "It will take a long time, but it is essential at all levels, from the prosecutor's office to the police, because it will have consequences on the functioning of all institutions," explains Professor Abdelsalam. "So we might as well start right away! The trials of war criminals would allow us to transform the judicial system. We could do it very well with technical and financial support from the international community."

International or national justice? Two years after the revolution, opinions are still divided. "I want to see the criminals tried in Sudanese courts. An international court would be too foreign to our culture. Here some people will support the accused and some the victims, so we will have debates, which I think is necessary," says Mary James. This former SPLM leader who waged war against Khartoum from 1983 to 2005 in the name of the now independent South, lives in Kadugli. In her association, she takes care of women victims of the Nuba Mountains conflict, which continued until the revolution. For these victims, justice would show the revolution has been a success.

The problem, says the law school dean, is the government's lack of "vision". “It has not defined a model for transitional justice," he says. "Are we moving towards a system like the one in South Africa, Rwanda, Liberia, or elsewhere in the world? Do we need a reconciliation process, a system of compensation, prison sentences, remembrance, guarantees of non-repetition? All of this needs to be debated. There must be transparent and inclusive reflection. It must come from the bottom up and certainly not be imposed."

Abdelsalam thinks there should be consideration of "à la carte" justice, adapted to each region. "The crimes committed in Darfur, in South Kordofan, in the East, are not necessarily of the same nature, so we need different models of transitional justice,” he says. “The victims do not necessarily have the same needs." In Darfur, for example, he says people prefer so-called "traditional" justice. According to studies initiated by the Khartoum faculty, they are not asking for trials and prison sentences but for compensation and a guarantee that the crimes will not be repeated. Local peace and forgiveness are preferred. In Khartoum, on the other hand, there is a strong demand for trials and prison sentences. In the Nuba Mountains, it is more common to hear calls for recourse to the courts, or to international justice, for example against Ahmed Haroun. Wanted by the ICC since 2007 for alleged crimes in Darfur, he was governor in Kadugli, and he used the same methods there.

The transitional leadership promised to "cooperate" with the ICC in the Juba Agreement of October 2020. But if Ali Kushayb, wanted since 2007, has been in detention in The Hague since June 2020 it is because he surrendered to the authorities in Bangui, who handed him over to the ICC. The other accused requested by the ICC and detained in Khartoum are still there, including Ahmed Haroun and especially Omar Al-Bashir. An announcement that the former head of state would be transferred to the international court caused a big stir in February 2020, but since then nothing has happened. The 77-year-old former dictator is still within the four walls of Kober, the old Khartoum prison on the banks of the Nile. 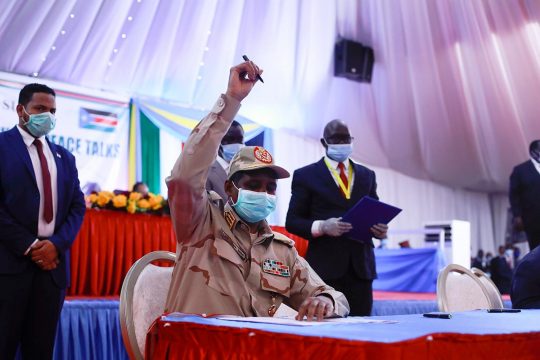