On May 28, Gambia’s Truth, Reconciliation and Reparations Commission (TRRC) ended its public sessions, after 871 days of hearings that involved testimonies from 392 witnesses with harrowing and sometimes inspirational tales of defying dictatorship. The TRRC confirmed that at least 250 people were sent to their graves on the orders of Yahya Jammeh, who ruled The Gambia from July 1994 to January 2017 before he was forced into exile in Equatorial Guinea. “And that does not include the enforced disappeared,” said TRRC legal counsel Essa Faal in his final speech before the Commission. The Commission’s final report and recommendations are now expected to land on President Adama Barrow’s desk in July.

There were many spectacular testimonies from numerous alleged perpetrators since the TRRC began its public hearings on January 7, 2019. But a less high-profile aspect of its work was about reconciliation, a vexed question that no one has clear answers to.

In November 2019, the Commission was in Jambur village, one of the most affected settlements during Jammeh’s 2009 witch doctors hunt that would cost at least 41 lives and cause people serious health issues. It also left communities broken by accusations and counter-accusations. The TRRC public sessions brought these pains to the fore. And alongside, the Commission’s reconciliation team offered an in-camera hearing between villagers that was meant to mend the burned bridges. In the Jambur community hearing Sainey Bojang, the village head accused of colluding with the witch hunters, and the elders of the village reconciled, while Omar Jawo, the head of a police station in Barra who had assisted the hunt, reconciled with the people of Barra and Essau towns.

On July 1, 2020, the Commission also brought together a few people who had a bitter past within the country’s prison system. It held reconciliation hearings between popular politician Omar Jallow, a former Agriculture Minister under the deposed People’s Progressive Party government, and Major Bubacarr Bah, who tortured Jallow in 1996. In this July event Malang Tamba, a confessed torturer at Mile 2 prison, apologized to Lamin Jah and Soriba Conde, two prison wardens he had tortured. Conde himself apologized to former chief of the Gambian police Ensa Badgie, against whom he had given false testimony in court in 2013. Conde, a former armed robber, claimed he had been coerced to say before the court that Badgie was supporting their robberies for personal gain. At that time Conde was already serving a 14-year jail term in Mile 2, the country’s central prison. Ebrima Jammeh, also known as Mile 2 chief torturer, also apologized to Jah and Conde and the prison wardens he had tortured during his time in Mile 2. 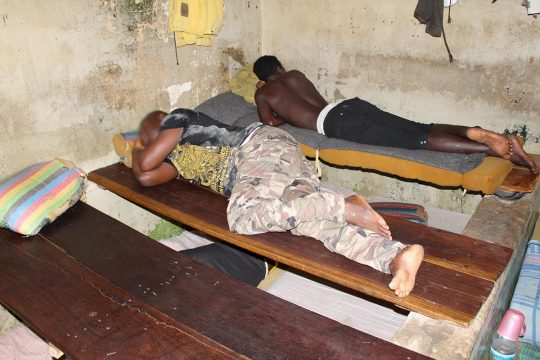 The truth behind the walls of Mile 2 prison, Jammeh’s “five-star hotel”

There was one impromptu reconciliation moment when in April 2019 the former N°2 of the military junta Sanna Sabally met Holo Bah, a petty trader his orderly shot in 1995, when Sabally was vice-president of the country, for not leaving the road as his convoy passed. This happened live when Sabally was talking about the incident during his testimony and was informed the lady was in the audience. There was another reconciliation hearing between Sabally and his former comrade-in-arms Edward Singhateh whom he had blamed for his torture after he was arrested by Jammeh in 1995. This time, Sabally was in the position of the victim.

In the same month of April 2019, Lt. Colonel Lamin Fatty, a former bodyguard of Singhateh, also appeared before the TRRC. He apologized to Alagie Kebbeh, a soldier he subjected to cruel treatment by putting him in the boot of a vehicle, driving and dragging him around.On May 20 this year, under the auspices of the TRRC, Fatty met and reconciled with Kebbeh’s daughter, Chawa Kebbeh, who operates a canteen at the TRRC.

In other hearings, an officer of the National Intelligence Agency’s (NIA) Special Operations Unit, Basirou Sey, reconciled with Sajor Touray, a former soldier arrested by the NIA, and Amadou Jogoh Sowe, another former detainee, while Omar Cham, also an NIA Officer, reconciled with Musa Jawo and Nfamara Nasso, two torture victims at his hands.

Brigadier General Alagie Martin, a former member of Jammeh’s State Guard famous for admitting to “mercilessly beating” someone and yet denying it was torture, testified before the TRRC on June 20, 2019. He had supervised the torture of Sanna Sabally, Sadibu Hydara, a former Minister of Interior, and Colonel Babucarr Sanyang. Hydara, arrested with Sabally, died in custody reportedly as a result of torture. Their mode of torture included suffocating with a plastic bag and being struck on the butt with an AK47 assault rifle. Martin has been on administrative leave since he appeared before the TRRC. In the May 20 reconciliation hearing, he carried a small calabash of cola nut to Colonel Sanyang before the Commission. “I am very, very sorry for what has happened. It is regrettable,” he said to Sanyang. “I would like to say: Colonel Sanyang, find a place in your heart to forgive me.”

Sanyang, a serving member of the army, had to work under Martin as his deputy Inspector General at the army headquarters in Banjul years after he had been tortured under Martin’s orders. “It was very difficult for me when I received my posting order from the Yundum Barracks to the Joint Headquarters and was appointed Deputy IG of the army. It is only in the military that you will work on orders whether you like it or not. The response is always ‘yes sir’. But if it was not in the military, I was going to turn down the appointment,” said Sanyang before the TRRC. Despite the difficulty of putting his past behind, Sanyang said he accepted Martin’s apology wholeheartedly, before they took a joint picture.

Reconciling in a politically divided nation

Though the public hearings have now closed, the TRRC is working on several reconciliations between perpetrators and victims, including between traditional ruler Chief Yahya Jarjusey, accused of several rights violations, and the people of Sey Kunda village in Lower River Region. Another such hearing is planned between former Jungler Omar Jallow and imams he has confessed to having tortured, Bakawsu Fofana and Baba Leigh. Jallow should also meet with the father of Alagie Ceesay, one of two Americans killed under Jammeh.

These hearings, which are usually public, are held at the request of perpetrators and victims who expressed the desire to reconcile, according to Commissioner Ousainou Jallow, chairman of the reconciliation committee. “These gentlemen have come on their own and shown all willingness to reconcile in spite of all what has happened in the past,” said Jallow. “The essence of reconciliation is that the perpetrators must accept their misdeeds. Those who have been victims will also accept and be willing to forgive and to forget.”

Ansumana Ceesay is the one the Commission’s staff member leading reconciliation efforts. “The biggest obstacle is political differences, because during the baseline survey we realized that places like Foni were reluctant to admit some of the revelations at the TRRC while this was totally a different case in the Lower River Region,” he said. In the 2016 elections that led to the defeat of Jammeh and his departure from The Gambia, the difference in votes between Jammeh and his opponent Barrow was just 18,000. Jammeh’s supporters still won five seats in the National Assembly, and they all come from the former dictator’s native region of Foni. For some of Jammeh’s supporters, the TRRC is part of a wild conspiracy against the former ruler.

The demand for punishment

According to Gambian scholar and researcher Sait Matty Jaw, “it will definitely take time for victims to heal and, therefore, reconciliatory measures must not only focus on forgiveness but ensuring that victims are restored to their full being. Hence, I think implementing an effective reparations programme can significantly support reconciliation efforts.”

“Another obstacle is managing expectations of victims because a majority of them did not understand that justice cannot be automatic,” said Ceesay. Even in their reconciliation outreach initiatives, he said people do express concern that there must be criminal justice, for which the TRRC is expected to make recommendations.

According to a 2018 survey by Afro Barometer, a pan-African survey group, 68% of Gambians say “perpetrators of crimes and human rights abuses during Jammeh’s regime should be tried in court”. “The truth is Jammeh took us on a wild ride for his own self-aggrandizement. He has to pay the price and those who enabled him also have to pay the price. We all crave for reconciliation and that is fundamental. We all crave for unity of the Gambian people because we are in one little boat. But there must also be justice,” said legal counsel Essa Faal in his last speech before the Commission on May 28.

“We usually tell [people] that reconciliation has no bearing on the recommendations of the commission, prosecutions in particular,” Ceesay said. “And also make them understand that a good measure of humanity is restored when people are let go of their anger and hatred and when people are relieved from the unrelenting burden of guilty conscience.”