A year ago, on 16 July 2020, the Vatican issued new (but non-binding) guidelines telling bishops to report cases of clerical sex abuse to civil authorities even where local laws don’t require it, as is the case in some countries, and in some American states. Since his election in 2013 Pope Francis has vowed to tackle such crimes in the Catholic Church, which span decades across the world. But United Nations Special Rapporteurs say the Catholic Church is still obstructing justice and must step up its measures to take on this scourge.

A UN statement on June 21 revealed that four Special Rapporteurs had written to the Holy See (Vatican diplomatic representation) in April this year urging accountability for perpetrators, reparation for victims, more transparency and an end to “obstructive practices”. The letter was kept confidential for 60 days to allow Church authorities to respond, but they have not done so.

Fabian Salvioli, UN Special Rapporteur on the promotion of truth, justice, reparation and guarantees of non-recurrence, says in an interview with Justice Info that he still does not rule out a response, since these are not simple allegations. “But if there is no reply,” he added, “then the silence is very loud.”

Salvioli signed the letter along with UN Special Rapporteurs on the sale and sexual exploitation of children (Fatima Singhateh); torture and other cruel, inhuman or degrading treatment (Nils Melzer); and on the rights of persons with disabilities (Gerard Quinn).

Justice Info has written to the Holy See requesting a response to their letter, but has not received a reply.

“It’s great that Special Rapporteurs have addressed the impunity that reigns in most clergy abuse cases globally,” says Victor Sande-Aneiros, a researcher on this issue at the London-based NGO Child Rights International Network (CRIN). “The more UN bodies and experts that address the issue, the more attention and visibility it gets.”

But he also says that the Holy See has “a history of shrugging off these calls for justice”. “Not only has it not responded to the Special Rapporteurs, but it continues to deny responsibility for abuse perpetrated at the hands of individual priests, arguing that it’s not liable, as well as when it’s committed abroad by saying it doesn’t have jurisdiction.”

This is not the first time that the UN has spoken out on child abuse in the Catholic Church, but with four Special Rapporteurs signing the latest letter, Salvioli says this is the first time it has issued a “cross-cutting” call. Their letter follows up on an April 2019 communication by previous UN Special Rapporteur on the sale and exploitation of children Maud de Boer-Buquicchio and her press release in December that year, in which she expressed similar concerns.

The latest letter also makes reference to a 2014 report by the UN Committee on the Rights of the Child, which said the Holy See had not recognised the scale of the crimes committed by members of the clergy, had not adopted the necessary measures to tackle the problem, and was continuing policies and practices that perpetuated impunity and allowed abuses to continue.

The Vatican is a signatory to both the UN Conventions on the Rights of the Child and on Torture. The committee monitoring implementation of the Convention on Torture also noted in 2014 that concordats (conventions between the Holy See and a particular state that define their relationships on certain matters) and agreements that it has negotiated with other states were obstructing the pursuit of justice against suspected perpetrators of child sexual abuse.

“This is just the tip of the iceberg”

An exclusive map published by Justice Info in September 2020 gives an overview of this unprecedented justice issue, as well as transitional justice measures that some countries are starting to put in place to deal with it. CRIN published a 2014 report on child sex abuse in the Catholic Church to coincide with the UN’s first review in nearly 20 years of the Vatican’s child rights record.

There are tens of thousands of victims across the world, with crimes going back decades and perhaps centuries. The UN Special Rapporteurs gathered complaints from victims and victims’ groups, documentation from within the UN and many sources around the world. Their letter makes reference to commissions of inquiry in Germany, Belgium, France, Canada (Truth Commission on Church-run indigenous schools), Chili, Mexico, Colombia and Argentina, revealing thousands of cases and many more victims.

Asked to give a figure for the total number of cases recorded, Salvioli would say only that “the number is enormous” and “this is just the tip of the iceberg”, as it is still difficult for victims to speak out and new cases are still being uncovered. He points to the recent discoveries of mass graves in Canada containing the remains of nearly 1,000 pupils at former Church-run indigenous schools and says “it is possible there may be more”. He called for a full investigation.

Perpetrators in these cases can be found at all levels of the Church, says Salvioli. Crimes include many forms of sexual abuse against children and handicapped minors, as well as forced adoptions.

Sexual abuse in the Church: map of justice worldwide

No information on Vatican-run trials

While UN experts recognise that the Vatican under Pope Francis has taken some welcome steps in the right direction, they say it is still obstructing justice, notably by transferring abusive clergy to other jurisdictions, concluding agreements with states that limit their ability to prosecute suspected perpetrators, and lobbying against removal of statutes of limitation for these crimes.

The Special Rapporteurs also noted the announcement of first prosecutions before the Vatican Criminal Court for sexual abuse and cover-up. But Salvioli says they have no further information. “I want to see the results of those trials and the possibility of participation for victims,” he told Justice Info. “And I want to see what are the penalties, what are the reparations for victims before I can give a conclusion on whether those trials are upholding international standards or not.” The Special Rapporteurs’ letter calls for the Vatican to transmit full information on this, along with all other measures it may be taking to tackle child sexual abuse in the Church.

Given the Church’s obstruction of justice, Sande-Aneiros of CRIN says the situation “raises the question of accountability of states where the Catholic Church is present. If more countries had the courage to investigate the large-scale abuse of children in the Church, we wouldn’t need to wait for the Vatican to respond”.

Asked which countries are doing the most, Salvioli says there has been progress, and each country’s approach is different. He welcomed the report of Canada’s Truth Commission and apologies offered by the Canadian Prime Minister, but said this was not yet enough because there also needs to be justice and reparation.

Obstruction of justice as a deliberate and systematic attack

While victims testified before the Canadian Truth Commission, the whole truth remains hard to get. “It’s so difficult because usually perpetrators are silent, and that is common with perpetrators of crimes against humanity,” says Salvioli.

Whether the intent and scale of sexual abuse in the church constitutes a crime against humanity is actually a controversial debate among jurists. In current international criminal law, it would have to qualify “as part of a widespread or systematic attack directed against any civilian population, with knowledge of the attack,” Salvioli notes. He points out that it does not qualify as such under the Statute of the International Criminal Court, “but perhaps in the future it could be seen as a crime against humanity”.

Salvioli does not believe that child sex abuse is a deliberate and systematic attack by the Church, but, he says, obstruction of justice is – at least up to now. 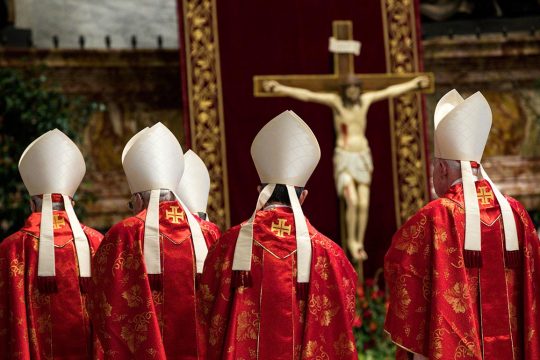 Sexual abuse in the Church: Is it a crime against humanity?
Share
Republish

Leigh Payne: Why Latin America is leading the way on corporate accountability

Starvation, a war crime never yet punished, in Ukraine and elsewhere
Most read