“Notwithstanding the heavy schedule of work devoted to completing the draft report, the Commission informed the Attorney General on 27 July that it needed more time (about eight weeks) to complete all 16 volumes of the report and other important documents,” Dr Lamin Sise told journalists in Banjul, Gambia’s capital city, on Wednesday. The chairman of the country’s Truth, Reconciliation and Reparations Commission (TRRC) announced a new date for the submission of its final report: 30 September 2021.

Between January 2019 and May 2021, the TRRC has received 2,600 statements and heard testimonies from 393 witnesses covering sixteen themes. Along with an activity report of the Commission’s outreach engagements and a portrait album of the public hearings, the final report will comprise of sixteen volumes, each containing an overview, key findings, and recommendations on the various themes investigated by the Commission on human rights violations under the regime of Yahya Jammeh (1994-2017).

Meanwhile, the TRRC has released some information about its action on victims’ reparations. Since it created a reparations fund, the TRRC has received US$1 million from the Government. This was part of monies recovered from sales of exiled Jammeh’s assets, although no further details were disclosed. The government promised to pay another US$1 million but that did not materialise.

Part of this reparations fund has already been spent on emergency payments while public hearings were still ongoing. “The urgent interim reparations were needed for some people who were really sick and needed urgent medical attention,” recalled Adelaide Sosseh, the deputy chair of the TRRC who presides over the reparations committee. That group of beneficiaries included torture victims, survivors of witch-hunting, those hit by Jammeh’s passing convoys and those affected by Jammeh’s hoax Aids treatment, among others.

The budget for those interim reparations was US$391,006 of which the Commission has spent up to US$254,154. According to figures shared by the Commission with the Center for Victims of Human Rights Violations – an NGO that brings together victims of Jammeh’s regime – US$215,053 were spent on patients sent to Turkey for treatment.

A shortfall of 3,3 million dollars

The interim reparations payments have left US$723,362 in the Commission’s account which is now being paid to 1,000 victims who qualified under the Commission’s policy. However, the TRRC full reparations assessment would require a pay-out of little over US$4 million, Sise and Sosseh said in a press conference on July 16.

This leaves a revenue shortfall of US$3.3 million, including US$625,610 to be paid to families of West African migrants killed in Gambia in 2005.

The victims or families of unlawful killing, enforced disappearance, torture, physical assault, unlawful detention, sexual and gender-based violence and inhumane and degrading treatment will receive payments of US$ 977 and above. These beneficiaries, numbering 758, would be paid on a pro rata basis and in instalments. For instance, families of those who were unlawfully killed should receive up to US$11,730.

The TRRC may spend the 1 million dollars it has received. But beyond this, the government would have to take over.

Plans for a reparations act

Justice Minister Dawda Jallow told Justice Info he is already working on an act of parliament that will establish an independent agency to take over the Commission’s action and complete the reparations work. It is unclear how this agency will function but Jallow said the bill will be before lawmakers in the last quarter of this year.

“I think the people need to have confidence in the process. If it is government-managed, we might probably run into complaints of bias or things of that kind,” explained Jallow.

Gambia is currently preparing for its 2022 budget. Various state institutions are already holding their budget bilateral talks with the country's Finance Ministry. “I have given instructions that the government needs to put aside substantial money towards” reparations for Jammeh’s victims, said Jallow. “I am not too sure if the government can absorb everything that they [the TRRC] have recommended. We may seek help but we have to accept first that it is our responsibility: the alleged violators were state operatives.”

Some tensions can already be felt though. About two weeks ago, Yusupha Mbaye – who was shot during the April 2000 student demonstration and was permanently handicapped as a result – returned $400 paid to him by the Commission as first instalment. According to the Commission’s reparations policy, the category under which Mbaye falls should be paid US$2,000. When returning the money, the wheelchair-bound Mbaye sent a letter to the TRRC with a list of demands, including having a permanent nurse, continuous provision of urine bags, continuous provision of catheter bags, continuous access to physiotherapy services, provision of a permanent and monthly monetary allowance subjected to adjustment in line with prevailing economic circumstances.

Mbaye has already received treatment in Turkey at the expense of the TRRC. In fact, Commissioner Sosseh revealed on a WhatsApp group that USD64,336 were spent on Mbaye’s trip to Turkey. However, Mbaye said he is still in pain and unable to urinate normally. For rights activist Madi Jobarteh, the Mbaye case requires special attention. “Even if you give a one-time payment of 1 million dalasi [about 20,000 US dollars] to Yusupha, it will not mean much in the long term,” he said. “For me, people like Yusupha, who cannot do anything for themselves, should be provided a set of services just to enable them to live with dignity.”

So far, the Victims Center – which is generally seen as a legitimate representative of the victims and has been consulted by the two successive Ministers of Justice under current president Adama Barrow – has not taken any definitive position on the case of Mbaye. The NGO board chair Sheriff Kijera gives a rather positive assessment of the reparations process up to now. “I am not getting calls from victims complaining about the amount that they are being paid,” he told Justice Info. “We have not heard any major problems being reported other than complaints from people that they have not received their reparations yet.” But the whole program is still in its early stages and the NGO continues to monitor it.

Doubt about the Government’s commitment

In December this year, Gambians head to polls to elect a new president. The deputy leader of the Alliance for Patriotic Reorientation and Construction (APRC), former president Jammeh’s party, Ousman Jatta, told local media that they have nearly reached an agreement with Barrow’s National People’s Party. As a result, critics already doubt that both post-TRRC reparations and prosecutions will be taken seriously.

Justice Minister Jallow assures the government's strong commitment to implementing the recommendations of the Commission. But Jobarteh is more pessimistic. “I have little hope that the Government will meet its obligations to survivors. Since the launch of the transitional justice program by the President himself in 2017, it is unfortunate that he has not shown the necessary political will and commitment,” said the rights activist. “What this means is that civil society and the international community should become more vigilant to put pressure on the Government to fulfil its obligations.” 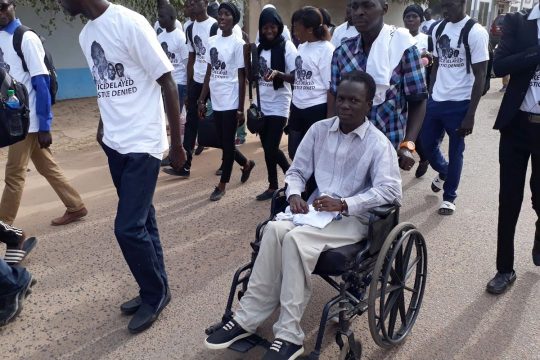