According to CNN, the United States has proposed a prisoner swap deal with Russia to release Viktor Bout, a convicted arms dealer serving a 25-year term, in exchange for Brittney Griner, the American basketball player recently sentenced to nine years by a court in Moscow for possessing and smuggling drugs, and Paul Whelan, an ex-U.S. marine serving a 16-year jail term for espionage. But Bout’s release would come as a setback for justice in Liberia, warned justice campaigners, security experts and a former UN chief prosecutor.

Bout had been active in Afghanistan, Colombia, Angola, the former Yugoslavia, Yemen, Somalia and the Democratic Republic of Congo (DRC). But it was his deals with former Liberian president Charles Taylor that capped the former Soviet soldier’s career as the world’s once most notorious gunrunner. Between 1989 and 2003, Bout sold weapons to Liberian warring factions—most notably Taylor—busting several United Nations arms embargoes. During that time, Taylor’s forces and rivals illegally exploited the country’s timber and mineral industries to buy Bout’s weapons. While Bout busted arms embargos to supply Taylor with arms and ammunition in Liberia, Taylor illegally exploited the country’s logs and minerals, and abused its huge shipping registry—the second-largest in the world—to pay Bout. The two men met personally, according to eyewitnesses cited by American journalists Douglas Farah and Stephen Braun in their 2007 book “Merchant of Death: Money, Guns, Planes and the Man Who Makes War Possible.”

Viktor Bout’s fleet of ships and airplanes transported the weapons to Liberia, using different pseudonyms and shell companies, transiting through countries like Gambia, Chad, Burkina Faso, Cote d’Ivoire and Niger. (Bout is reported to speak English, Russian, Portuguese, French, Arabic and other languages, a benefit of his training as a translator in the Soviet military.) In 2005, the United States Treasury Department said Bout controlled one of the largest networks of ships worldwide.

Taylor ran his illegal timber and arms operations with Bout mainly through Guus Kouwenhoven, a Dutch businessman who owned Oriental Timber Company (OTC) and ran the largest timber company in Liberia at the time, according to Swiss NGO TRIAL International. By 2000, the company controlled 1.6 million hectares of forestland, or 42 percent of the country’s concessional forest. In one transaction, OTC paid Taylor US$3,5 million, according to a 2002 Global Witness report. A United Nations Panel of Experts on Liberia cited a transfer of US$500,000 by OTC’s parent company in Singapore, Borneo Jaya Pte Ltd to San Air, one of Viktor Bout’s airlines. OTC-chartered ships supplied weapons to Taylor at the Port of Buchanan three times between September and November 2001, the UN experts said. The supplies contained 7,000 boxes of ammunition, 5,000 rocket-propelled grenades, 300 howitzer shells and other equipment, according to a report by Farah in the Washington Post. Taylor’s forces protecting the company’s interest committed several human rights abuses. Liberia’s Inquirer newspaper reported in 2000 allegations that the company operated a “private prison and barracks.”

Some 250,000 people were killed in the Liberian conflict, which spiraled to other countries in the region. The chaos stirred reform in the global trade of minerals and timbers, creating the Kimberley Process Certification Scheme and the European Union’s Voluntary Partnership Agreement. At the time the UN imposed sanctions on Liberian timber (and diamonds) to curtail the carnage. In July 2004, U.S. President George W. Bush issued an executive order, freezing the assets of Bout, Taylor, Taylor’s relatives and some members of the Liberian government. Taylor’s ex-wife and now Vice President of Liberia Jewel Howard Taylor, and opposition figure Benoni Urey were also subject to the measure. The assets freeze followed a similar one by the UN Security Council earlier that year. It took more than a decade for the assets freeze and travel ban to be lifted.

In 2003, Taylor was forced into exile by an armed rebellion; in 2012 he was sentenced to 50 years in jail by a UN court for his role in the civil war in Sierra Leone. Kouwenhoven was arrested in The Netherlands in 2005. He was acquitted by a Dutch court in 2008, convicted and sentenced to 19 years in a re-trial in 2017 but he has yet to be extradited by South Africa where he fled after his first trial.

Viktor Bout initially ignored the sanctions and moved on with his illegal arms deals after Taylor’s fall, first surviving an International Criminal Police Organization or Interpol notice, and forgery charges in the Central African Republic. In 2008, he was arrested in an Interpol operation in Bangkok, Thailand. Bout had offered to supply weapons to rebels of the Revolutionary Armed Forces of Colombia (FARC). It turned out the rebels were actually officers of the U.S. Drug Enforcement Agency (DEA) and the Royal Thai Police. Initially, American prosecutors charged him with conspiracy to kill U.S. nationals, conspiracy to kill US officers and employees and conspiracy to provide surface-to-air missiles and other weapons to a foreign terrorist organization. But while the U.S. Justice Department pressed for Bout’s extradition from Thailand to America, prosecutors found that Bout had been negotiating to buy a plane on U.S. soil, which violated the sanctions Washington imposed on him and Taylor. Additional charges were filed against him: illegal purchase of aircraft, wire fraud and money laundering. He was convicted by a New York court in 2012 and sentenced to 25 years in prison, 15 years of supervised parole and forfeiture of $15 million. The court dismissed the initial charges, saying they only originated from the deceptive operation that led to his arrest.

That drew the curtains on the career of Viktor Anatolyevich Bout, born on January 13, 1967 in the former Soviet Union now Tajikistan. His life has inspired a number of documentaries, TV series and movies, including “Lord of War,” which exposed the nature of the international illicit arms trade.

The difficult link between arms supply and war crimes

Viktor Bout was never convicted for his alleged crimes in Liberia – nor for any war crimes. Prosecutors at the Special Court for Sierra Leone found it difficult to indict Bout, according to Stephen Rapp, former chief prosecutor of the UN court. Rapp said the court faced a number of hurdles including its caseload, the court’s exit strategy, extradition issues and the strength of the evidence against Bout. “The evidence was quite strong on him providing military assistance, arms to Charles Taylor in the wars in Liberia. But when it came to Sierra Leone, which we were prosecuting, we did not have strong evidence,” Rapp said via email.

There was evidence that Taylor supplied weapons to Sierra Leone’s military junta of the Armed Forces Revolutionary Council (AFRC) in 1997 as well as to the rebellion of the Revolutionary United Front (RUF) throughout the war (1991-2002) but prosecutors could not tell whether the weapons were used to commit war crimes. “We couldn’t really relate the arms delivered in 1997 to those crimes. So it was not a strong case against Bout,” Rapp said.

In 2009, Liberia’s Truth and Reconciliation Commission (TRC) recommended Bout be investigated for his role in the country’s crises. The allegations included illegal arms dealings, illegal extraction of natural resources, aiding and abetting economic crime actors, fraud, and tax evasion. It also recommended Taylor and Kouwenhoven face charges for war and economic crimes. But successive governments never prosecuted any of the former warlords living in the country, including some of them being powerful politicians. Former President Ellen Johnson Sirleaf, a Nobel Peace Prize winner who was also reprimanded for her alleged role in the civil war, ignore the TRC call. The football legend George Weah, Liberia’s current leader, has also not backed the idea. Calls for a Liberian war crimes court have been made repeatedly since Weah was elected president in 2018  to no avail.

Other countries have prosecuted a number of people in connection to Liberia’s wars in the 1990’s and early 2000’s. Alieu Kosiah was convicted last year by the Swiss Federal Criminal Court for crimes he committed in the First Liberian Civil War (1989-1996). Mohammed Jabbateh, who is serving a 30-year sentence and Thomas Woewiyu, who died awaiting sentencing, were convicted of immigration fraud and perjury in the United States. U.S. prosecutors proved the men had lied about their roles in the First Liberian Civil War. Gibril Massaquoi, a former Sierra Leonean commander was tried and acquitted by a court in Finland for alleged crimes in the Second Liberian War (1997-2003). Kunti K., another Liberian former commander will be tried in France next month.

But nobody was prosecuted in Liberia.

“[Bout’s] possible release is a dent in the quest for justice in Liberia,” says Hassan Bility, the executive director of Global Justice and Research Project (GJRP), a Liberian NGO which has gathered evidence against many former warlords, including all those prosecuted outside Liberia. “His imprisonment did bring some relief and justice to Liberia. The US, in line with its interest in justice, at least did something which we appreciate,” Bility adds.

Russia wants Viktor Bout, who has not spoken a word to the Americans about an alleged link between his trafficking network and the Russian government. “No American will be exchanged unless Bout is sent home,” Steve Zissou, his U.S.-based lawyer warned last month. Russian news agency Tass reported last week, that Alexander Darchiev, the director of the Russian Foreign Ministry’s North American Affairs, confirmed the exchange deal.

“I would urge countries that have suffered the wars armed by Bout, like DRC, Liberia and Sierra Leone, to seek his extradition from the US,” says Patrick Alley, a campaigner at Global Witness. Liberia has had an extradition treaty with the United States since 1939.

Arthur Blundell, a security expert who worked with the U.S. government and the UN on Liberia’s forestry reform, says his release would add salt to the country’s wounds. “Bout in prison at least meant that he was not able to conduct his arms-trafficking and other illegal operations,” Blundell told Liberian newspaper The DayLight via email. “This undoubtedly saved thousands of lives in conflict zones around the world.”

“I will much prefer that he not be traded. I will like for him to serve his complete sentence before he’s released,” said Rapp. “Obviously, if there were a war crimes and economic crimes court created [in Liberia], then one could look at the possibility of prosecuting Viktor Bout for the crimes he contributed to in Liberia. Now it will be very hard to obtain his extradition from Putin’s Russia but that wouldn’t keep one from indicting him and bringing pressure to bear. Russia has been building its relationship with Africa in the last decade, and Liberia could use that,” Rapp concluded. 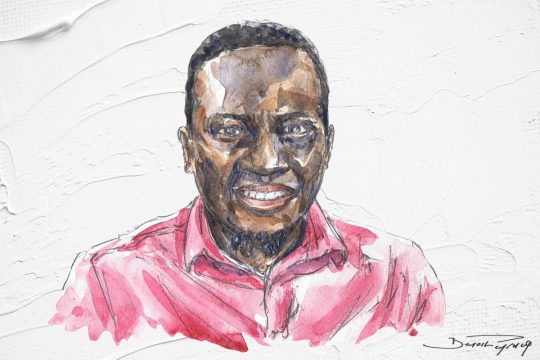 Aaron Weah: “Liberians have been reminded that justice is still possible”
Share
Republish