For over 50 years, Colombia has experienced one of the longest-running internal armed conflicts in the Western Hemisphere, involving governmental armed forces, the paramilitary and guerrilla groups. The high levels of violence perpetrated by the various parties have resulted in mass victimization, primarily affecting the civilian population. Over the years, demobilised armed groups have been engaged in reparative justice measures in an attempt to satisfy victims’ rights to truth, justice and reparation. The 2016 Havana Peace Agreement with the Fuerzas Armadas Revolucionarias de Colombia-Ejército del Pueblo (FARC-EP), Colombia’s oldest and largest left-wing guerrilla group, constitutes the latest initiative in this regard.

The Justice and Peace Law: a first step towards reparative justice?

Past peace processes in Colombia largely neglected to take account of victims’ rights, with amnesties prevailing in order to ensure peace and security. In 2005, a significant shift took place with the passing of Law No. 975, known as the Justice and Peace Law (JPL), which brought the process of armed groups’ demobilisation, disarmament and reintegration onto the terrain of TJ. Particularly, demobilised combatants who benefit from the JPL, by virtue of demobilisation and reduced sentences for grave crimes, are required to, among others, provide reparations to the victims of the criminal act they are convicted of. Notably, a landmark ruling of the Colombian Constitutional Court sought to strengthen victims’ rights by complementing combatants’ individual responsibility for victim reparation with a collective civil responsibility on the part of the armed group and its members. Moreover, the Court recognised a subsidiary responsibility for the state to provide reparations to victims when these individuals or organisations are unable to do so. This progressive approach appears to be in line with Principles 15 and 16 of the UN Basic Principles and Guidelines (UNBPG).

While the JPL constitutes the first significant attempt to afford reparative justice in Colombia, it has been severely criticised for prioritising demobilisation efforts over justice concerns. Moreover, after 10 years of the JPL, the results­­ are unsatisfactory. The demobilised combatants only contributed approx. 6% of the resources needed for the ordered compensation measures, with a significant number of them unwilling to effectively repair the victims. Pursuant to the 47 sentences issued, 195 demobilised were convicted (only 8.2% of those participating in the process). Against the backdrop of the JPL’s ineffectiveness, a comprehensive administrative reparations programme and a land restitution programme were established under the Victims’ Law of 2011. Although the latter constitutes an important effort in securing effective redress for the victims of the conflict, the programmes face significant challenges. In 2010, the JPL process was complemented by Law No. 1424, which foresees in the engagement of low-level offenders who fall outside the scope of the JPL in a truth-seeking process in exchange for judicial benefits. However, the lack of victims’ direct access to the obtained material weakens the process’s potential of satisfying their right to truth as a form of reparation (Principle 22(b) UNBPG).

The Havana Final Peace Agreement: the responsibility of the FARC-EP to satisfy victims’ right to reparation

Despite some glitches, the four-year peace process between the Colombian government and the FARC-EP successfully resulted in the adoption of a Final Peace Agreement (FPA) in 2016. The Agreement foresees in the establishment of a ‘Comprehensive System for Truth, Justice, Reparations and Non-Recurrence’, a transitional justice system that seeks to provide a comprehensive response to victims. The Comprehensive System places particular emphasis on restorative and reparative measures, while acknowledging that justice cannot be achieved only with retributive sanctions. Significantly, victim reparation is understood as a vital condition for justice. The strong commitment of both negotiating parties towards victims’ rights and needs is unprecedented in comparison to past peace processes in Colombia.

The Comprehensive System foresees numerous measures for victims’ comprehensive reparation, which include, in accordance with the UNBPG, restitution, compensation, rehabilitation, satisfaction and guarantees of non-recurrence. As stipulated in the FPA, the FARC-EP will engage with these various forms of reparation. For instance, former members of the FARC-EP who have caused harm or injury during the conflict are required to make concrete contributions to reparations, which involve their participation in reparation-oriented projects as part of their reintegration process (e.g., infrastructure-rebuilding work and programmes to clear areas of anti-personnel mines). Within this framework, reparation measures are connected with the eventual reintegration of the ex-combatants as important aspects of a restorative justice process. As an organisation, the FARC-EP has committed itself to hand over an inventory of all its collective assets, which will be exclusively used to provide material reparations to the victims. However, concerns have been raised over possible undeclared assets and the lack of official registration of much of the listed real estate. Moreover, symbolic reparations, such as symbolic acts of apology and recognition of responsibility, have taken place in the early stages of implementation. The strengthening of land restitution measures constitutes a further example. As is the case under the JPL process, the Colombian government will take a subsidiary responsibility to contribute to the reparation of victims when former FARC-EP members do not have sufficient resources to do so, hence seeking to safeguard victims’ right to redress. 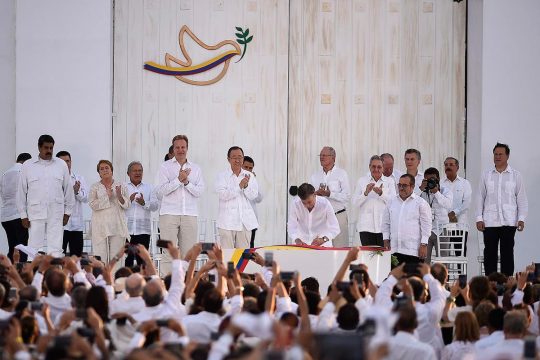 Aside from these specific reparation measures, the Comprehensive System provides for the FARC-EP’s engagement with the other transitional justice mechanisms, which incorporate on their turn reparative justice components. Particularly, the Truth Commission and the Unit for the Search of the Disappeared will contribute to victim reparation by virtue of the public disclosure of the truth and will benefit from the participation of former FARC-EP members. Furthermore, those wanting to enjoy the special treatment granted under the Special Jurisdiction for Peace (SJP), the justice component of the transitional justice system, will need to provide full truth, reparations and guarantees of non-recurrence. The same holds for ex-combatants benefitting from amnesties or pardons for political crimes. Such special treatment, the so-called ‘alternative sanctions’, is granted when the offender acknowledges full truth and responsibility in the early stages of the criminal proceedings and involves reduced sentence and effective restrictions of freedoms and rights, rather than ordinary prison sentences. In this case, the imposed sanctions will be of a predominately restorative and reparative nature. This more lenient approach to justice has, however, led to significant criticism, among others by the newly elected President Iván Duque.

Notably, the envisaged Comprehensive System moves beyond an individualised accountability framework by engaging the FARC-EP in reparative justice measures not only by virtue of its individual members but also as a collective entity. Certain reparation measures place a clear emphasis on the FARC-EP’s collective responsibility towards their victims, such as the envisaged symbolic reparations. The FARC-EP’s responsibility to provide victim reparation is based on international legal standards. Particularly, it is recognised that the FARC-EP, as an armed group, can violate international human rights law, resulting in a duty to repair the harm caused. This is a progressive approach in light of the lack of clear secondary obligations on the part of non-state armed groups under international law. Moreover, although the FPA is not the first peace agreement to involve considerations for armed groups’ remedial responsibility (e.g., the Juba Peace Agreement on Accountability and Reconciliation), the degree of FARC-EP’s engagement in the design and the implementation of the Agreement’s reparative justice components is unprecedented. This shows that in certain instances it is feasible to engage armed groups in various forms of reparation that are normally required from states as part of their international obligations towards victims. Moreover, the comprehensive approach to reparative justice involving the FARC-EP as a proactive transitional justice actor is a welcome step, as the JPL process has reaffirmed the limits of court-ordered reparations in the context of gross and systematic violations.

Nevertheless, considering that the implementation of the FPA is in its initial stages and is taking place in a highly politicised and unstable context, it is not yet possible to ascertain in how far victims’ rights will be satisfied in practice, nor is it clear whether the FARC-EP will successfully carry out the commitments made in the FPA. These observations, notwithstanding, the recognition of the FARC-EP’s responsibility for their part in the conflict is a first step in remedying the harm and damage caused to the victims of the conflict and society at large.

*The author would like to thank Prof. Felipe Goméz Isa for his comments.