A few days ago the president decided to send “converted” former Ituri militia leaders to Ituri as peace messengers. Congolese people in the east will remember that it was one of Tshisekedi’s presidential campaign promises. But since he came to power in early 2019, violence has surged in the east of the country. In a January 10 report, the United Nations reported serious crimes being committed there.

"Peace is priceless. It's a difficult decision, but it had to be made to end this cycle of killings. This is how Jean-Marc Mazio, head of the stabilisation and reconstruction programme for eastern DRC (STAREC-Ituri) -- an initiative of the Congolese government -- justifies the agreement reached at the end of February with the Ituri Patriotic Resistance Force (FRPI). Through this compromise, which some decry as adding to the impunity of armed groups, Kinshasa hopes to finally restore its authority in this troubled region.

For their part, members of the FRPI and their allies are beginning to receive the dividends of this "deal". Germain Katanga, former leader of that militia which recruited mainly from the Lendu community, was released from prison on 16 March under this agreement. His release followed the release the day before of another former militia leader, Thomas Lubanga from the rival Hema community. The two former enemies had both been tried and convicted by the International Criminal Court (ICC).

On 21 April, three other former Ituri militia leaders were released from Ndolo military prison in Kinshasa, where they had been held for more than 10 years. Pitchou Pierre Célestin Mbodina Iribi, Floribert Ndjabu Ngabu and Mateso Nyinga alias Kung Fu, were all members of the Front des nationalistes et intégrationnistes (FNI), a militia close to the FRPI. 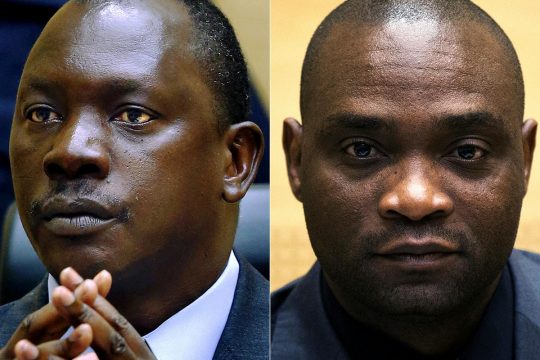 DRC: Lubanga and Katanga freed for peace in Ituri

“Tshisekedi asked us to promote peace”

The Congolese president, who had visited Ituri in July 2019, went further by receiving, on 27 April in Kinshasa, representations of Hema and Lendu communities, led respectively by Thomas Lubanga and Floribert Nzabu Ngabu. What did the head of state and former militia leaders have to say to each other? "The president has a great concern to see peace reign in the country and especially in Ituri province. That is why he invited us so that we can help the Congolese state to restore peace. He asked us to raise awareness on the ground, to go and mobilize people so that the province can regain peace," Ndjabu Ngabu told Justice Info. This native of Ituri, who says he is ready to start this "official mission as soon as the official conditions are met", is aware of the immensity of the task.

"It's a difficult mission. It takes a lot of tact and strategy to put the pieces back together. It takes a lot of effort. It also requires the collaboration of those on the ground," he acknowledges, hoping to rely on traditional chiefs in particular.

The ongoing violence in Ituri is mainly attributed to a group known as "Codeco", whose members are mainly from the Lendu community.  Without seeking to absolve this militia, Pierre Célestin Mbodina Iribi nevertheless affirms that "the Lendu community is not to be confused with the Codeco" which is, according to him, "a nebulous group, about which little is known", "a group of people with no political programme or known organisation".

At least a 20-year conflict

"Our strategy will be refined in Bunia with the institutions, the people, the communities," he continues, hoping to count on the participation of everyone, including the victims. "Everything should revolve around the victims. We believe that our first priority is the victims. We will meet the victims, we will talk with them. We will bring them a message of compassion so that they will accept, in their pain, to make their contribution to peace. It will be difficult, but if we remain in our resentment and pain, the pain will continue in Ituri. Everyone will have to take part in this mission. We will reach out to everyone."

Olivier Lieke, head of the chiefdom of Walendu-Bindi, the customary entity of these ex-militiamen, welcomes the government's approach. "The liberation of these ex-rebels is an asset for the pacification and development of the region. It is encouraging to see the Congolese government free them. For our brothers, it's a good sign," said the chief interviewed by Justice Info. "The detention of these former leaders of armed groups active in Walendu-Bindi was hampering the peace process in the region. Every time they were called upon to lay down their arms, they were afraid to do so, after seeing their leaders Germain Katanga and Cobra Matata arrested after their surrender. These detentions hindered the disarmament and demobilization of FRPI combatants. As a result, for more than 20 years there was no development," Lieke says.

In the Hema community, perceptions differ. "What is happening in Ituri is not an inter-ethnic war. It's a rebellion by Lendu subjects against the Congolese state," says Professor Pilo Kamaragi, a sociology teacher at Bunia's Higher Institute of Education and vice-president of the Ente cultural association. "To ask whether Thomas Lubanga will be able to engage his community in the search for peace is to pretend that it is at war. No, it is not. You should know that his community is not fighting in Ituri. It is Lendu militiamen who are attacking. Rather, we must ask ourselves: who has been arming them to attack the Congolese state from 2017 to date? Today, there are 68 IDP sites. This is a large-scale humanitarian crisis. We have to stop it."

“Tshisekedi wants a lull, not peace”

Chober Agenonga, a professor at the University of Kisangani and an expert in security and military sociology, welcomes this agreement but calls on the president to seek out the real instigators of the current violence. "Félix Tshisekedi must ask himself whether these former rebels really remain popular in their communities? Are we not going to witness a leadership war? Are they able to deter those behind the killings? And who is behind those killers? Who supports them? Because they are well-equipped and well-armed. Will they be able to convince the people who are backing the ones who continue to kill?”

He thinks the government must address the causes of the conflict in Ituri. "Felix Tshisekedi's strategy is to address the consequences, not the causes. He wants a lull, not peace. He must understand that peace is multidimensional. And in the case of Ituri, we must seek peace in all its dimensions, by addressing the causes of the conflict. This region has faced communal violence since 1911. And since our country gained independence (1960), Ituri has experienced a cycle of violence every decade. If the violence has returned, it is because none of the regimes have attacked the roots. 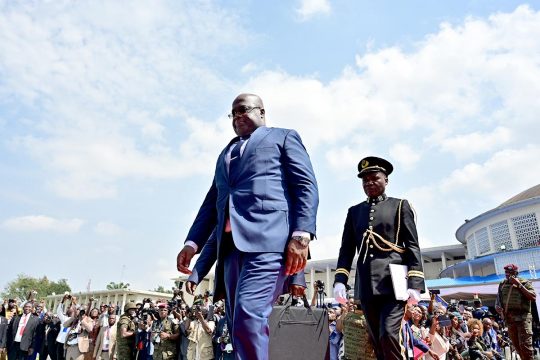 Will Tshisekedi act against impunity for serious crimes in Congo?

"A serious problem with justice"

Among the causes of the persistent violence in Ituri, Professor Agenonga cites impunity. "In Ituri's conflicts, there has always been a serious problem with justice. Only the leaders have been prosecuted or convicted in the name of command responsibility. Unfortunately, the rank and file militiamen who have killed and executed civilians have enjoyed impunity." He speaks of demographic pressure in a region where the population density is 300 inhabitants per km2, resulting in recurrent conflicts between herders and farmers for control of the land. Finally, he points to "poor supervision of disarmament, demobilization and reintegration programmes for ex-combatants", which results in the "return to the bush" of young unemployed people.

"If Felix Tshisekedi's government does not address these causes of conflict in Ituri, the former rebel leaders will not do anything lasting," he concludes. This is also the opinion of traditional chief Lieke. "The government must think about rebuilding the schools, hospitals and roads destroyed during the war and provide support for the unemployed youth," he says. The Congolese state must impose peace," stresses Professor Kamaragi. "Today, we appreciate seeing the army in action. The state must hunt down these well-equipped militiamen and try to understand where they get their weapons. These are dangerous groups. They must be eradicated."​

LUBANGA: "THE ITURIANS' SUFFERING WILL SOON COME TO AN END"

On Thursday 7 May, the President of the Union of Congolese Patriots and the first person to be convicted by the International Criminal Court in 2012 for enlisting child soldiers, gave his first press conference as a free man in Kinshasa, the capital of the Democratic Republic of Congo. Of Hema origin, Thomas Lubanga Dyilo spoke about his participation in the strategy for peace in Ituri, his native region, initiated by President Felix Tshisekedi. Here are some extracts.

"A mission has been entrusted to some people from Ituri. There are people who have a more or less sociological link with the Codeco [group from the Lendu community at the origin of the ongoing violence] who have been entrusted with this mission. I'm not part of this team. I am working from a distance, bringing together the elements with which I can help the head of state in other ways.”

"Shortly before the FRPI surrendered their arms and began to negotiate the principle of pre-cantonment with the government, it was the Lendu militiamen from Codeco who appeared in the Djugu territory and who are as we speak are committing unheard-of barbarity reminiscent of past millennia. Today, it is a third militia, Chini ya Kilima, whose structure and intentions are still little known, which has just made its appearance in Bira in the territory of Irumu.”

"In this tragic and intolerable context, we would like to highlight the peaceful attitude of the victims, who belong to the Hema, Alur, Mbisa, Ndo Okebo and Nyali communities. Despite repeated attacks and extreme violence, the members of these communities prefer to refrain from raising arms to defend themselves, not because they do not have the means to do so, but because they believe in peace and have faith in the Government of the Republic, which is expected to protect them. »

"I would like to urge them to persevere in this peaceful attitude because I remain convinced that their suffering will soon come to an end. I am convinced of this after I was received by the Head of State, in whom I noted a determination to bring peace to Ituri as soon as possible. I am ready to collaborate with him in his project to put an end to this situation, which can no longer last. »