What’s been going on for a year? What about the 231 calls for justice that were in its final report? Established in August 2016, the National Inquiry on Missing and Murdered Indigenous Women and Girls looked at the systemic causes of all forms of violence, including sexual violence, perpetrated against these women. The four commissioners based their recommendations on the 2,380 testimonies gathered, and concluded that there was a colonial genocide by the Canadian state. This conclusion was officially accepted by the Canadian government, in the person of Prime Minister Justin Trudeau, and was accompanied by a commitment to end it.

But no sooner was the report released than debate was already raging in Canada, including amongst politicians, on challenging the characterization of genocide. According to Fannie Lafontaine, one of the jurists who helped write the legal analysis of the National Inquiry, these reactions a year ago were “a denial of history, a refusal to see the colonial past as violence, as genocide”. The need to implement a rapid and inclusive action plan seemed all the more urgent.

A year later, the Canadian government asserts that initiatives have been put in place, including legislation on support for indigenous children and investments in housing. It also says that violence against these women and girls is a “continuing national tragedy” and that “much work remains to be done”. In December, Minister of Crown-Indigenous Relations Carolyn Bennett promised families that they would not have long to wait before “concrete measures are in place to end this national tragedy”, and committed to implementing the promised action plan by the first anniversary of the report.

The commissioners of inquiry are not sure. “It’s hard to get the facts,” says one commissioner, Michèle Audette, interviewed by Justice Info. “When I asked questions I seemed to understand that there was a reflection and a mobilization, so I told myself that things were moving. But we don’t know.” President of NGO Quebec Native Women Viviane Michel is also perplexed: “Maybe things are being done, but we don’t have a report, no overview (…). There is no transparency.”

A few days before the anniversary date came the announcement that the action plan was being postponed due to the Covid-19 pandemic.

Viviane Michel thinks this is just a “pretext, an excuse for the work that has not been done”. And “this plan is not new”, says Catherine Savard, another lawyer who contributed to the legal analysis of the investigative report. In 2017, an interim report, in which an action plan was mentioned, was made public. Moreover, implementing the recommendations (or “calls for justice”) of the National Inquiry is a “legal obligation of the government to remedy the ongoing violations of indigenous peoples’ rights and to end the genocide that continues to this day,” she says.

One year on, jurist Lafontaine makes a disturbing observation. “We see a federal government that chooses who is at the table, what information it shares,” she says. “It’s as if we wanted to replicate the models of the past. We see a very worrying status quo that gives the impression the government will reflect alone on how to implement recommendations, whereas we want a real partnership,” as mentioned in the report. “Decolonisation means power-sharing,” Lafontaine points out.

Commissioner Audette wants to believe it is because of the chain of events that have taken place this past year: the federal election; the crisis provoked by protests against a gas pipeline project and the subsequent movement supported by the Wet’suWet’en First Nation in British Columbia; and finally the Covid-19 pandemic. “If it hadn’t been for all that, I would be angry,” she says. “But right now I’m thinking, give them the benefit of the doubt!” 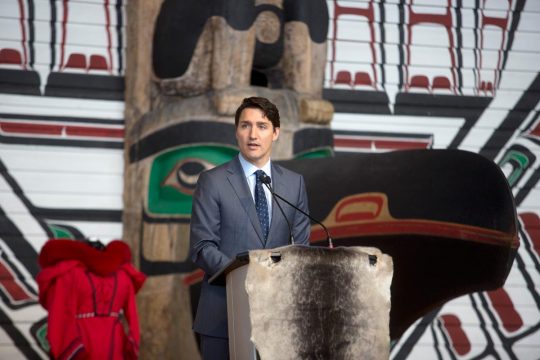 This did not prevent her from signing with the other three

Inquiry Commissioners a press release denouncing “a year of inaction” and “lack of transparency” while adding another recommendation for “external oversight”. The Commissioners call for Ottawa to engage an international, impartial organization to mediate and oversee the implementation of appeals to the courts. According to Audette, the objective is to force institutions to be more transparent, since there is a lack of mobilization and pressure in support of indigenous people.

“Such an impartial, independent body would make it possible to rebalance and review relations, to reflect on the current state of the Canadian state with its colonial biases,” says Lafontaine, who is seduced by the idea.

This postponement and frustration comes at a time when outrage is growing in the wake of recent incidents of police brutality against indigenous people. In less than a week, for example, a 26-year-old woman died during a police intervention and a man was hit by the door of a Royal Canadian Mounted Police officer’s vehicle. Minister of Indigenous Services Marc Miller denounced “shameful and disgraceful actions” and called for “full, independent and timely investigations”. Cree former MP Romeo Saganash called for a national inquiry into the relationship between police and indigenous people. Lafontaine doesn’t disagree with this idea, although she believes an inquiry would only conclude what has already been concluded: “systemic racism and a profound need for change”.

The Prime Minister’s first words this week expressed his desire to have every police officer in the country wear body cameras. In response to a press conference question on the report’s anniversary, Trudeau said: “The will is there, but more needs to be done in a concrete way”. “Things have to change. But repairing centuries of injustice, exclusion and violence does not happen overnight. We have to work together and we have to work hard,” he added. For his part, Minister Miller said at a press conference on Thursday, June 11: “I am committed to building a renewed relationship, based on recognition of these rights, respect, cooperation and partnership, and to ensuring that Aboriginal communities receive the care and support they need, when they need it,” he said at a press conference on Thursday, June 11. And Ottawa announced $133 million to support Aboriginal businesses hard-hit by Covid-19. 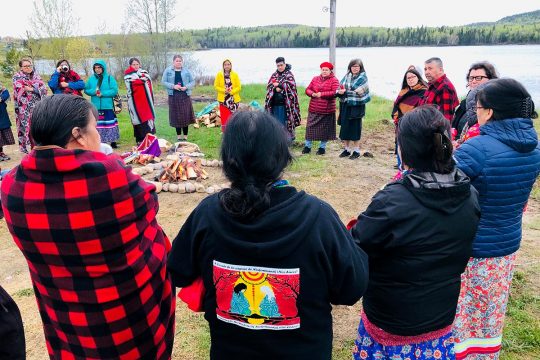 Beyond the promises, the “decolonization of minds”  advocated by the three jurists Lafontaine, Savard, and Amanda Ghahremani, in Justice Info, still seems far away, five years after the Truth and Reconciliation Commission and one year after the National Inquiry on Missing and Murdered Indigenous Women and Girls. Numerous cases are still being reported of missing or murdered indigenous women in Canada. “The tragedy has gone on long enough,” says Anishnabe chief Adrienne Jérôme. “Action must be draconian with rigorous and adequate means. Action must follow words, otherwise our mothers, daughters, sisters and friends will never be protected. Let us hope that this will not be the case.”