Laurent Semanza led the commune of Bicumbi, east of Kigali, for more than twenty years before being relieved of this position in 1993. Although he was no longer head of the commune when the Tutsi genocide began in April 1994, he remained an influential figure in the region, as witnesses at his trial affirmed. On May 20, 2005, the appeals chamber of the International Criminal Tribunal for Rwanda (ICTR) sentenced him to 35 years in prison after convicting him of genocide, crimes against humanity, and war crimes committed in 1994 in Bicumbi commune.

On July 26, 2018 Semanza, from his prison cell in Mali, petitioned the president of the UN Mechanism for International Criminal Tribunals (MICT) to examine the possibility of his early release. Semanza said he would have served two-thirds of his sentence by March 26, 2019. He invoked the general practice before UN courts that a convicted person is eligible for early release after serving two-thirds of his sentence. On August 1, 2018, the then president of the MICT, US judge Theodor Meron, criticized by Kigali for granting early releases, invited the Rwandan government to submit its opinion.

Kigali argued in its submission that the gravity of the crimes for which the former mayor was convicted and his lack of repentance meant his request should be rejected. There followed a long waiting period during which the convicted man was transferred to Benin, while Judge Meron was replaced at the head of the MICT by his Maltese colleague Carmel Agius. Upon taking office, Agius visited Rwanda, saying that the Mechanism would now favour a consultative approach with the Rwandan government, and announcing a review of the "Practice Direction on the Procedure for the Determination of Applications for Pardon, Commutation of Sentence or Early Release". The revised text was published in May 2020. It provides that the head of the Mechanism "may decide to seek or accept third-party advice" and that "the granting of early release may be subject to conditions". Rwanda and some Security Council member countries had called for this. Mechanism prosecutor Serge Brammertz had also argued that some of those released "glorify" the genocide, while Kigali accused them of preaching genocide denial.

It was therefore the revised directive that guided Judge Agius’s September 17 decision, in which he clearly stated that he had "taken note" of the Rwandan government's opposition to Semanza’s early release. “I do not consider it appropriate to exercise my discretion to grant early release to Semanza at this stage,” he said. “The high gravity of his crimes militates against releasing him early. Further, Semanza has failed to demonstrate that he has been sufficiently rehabilitated. Finally, there is no evidence that demonstrates the existence of sufficiently compelling humanitarian grounds.”

“It is a judicious decision by the court and we welcome it,” was the laconic reaction of Rwandan Justice Minister Johnston Busingye. Jean-Pierre Dusingizemungu, president of genocide survivors' organisation Ibuka, says this decision marks a turning point. "We currently have good relations with President Carmel Agius, a man of integrity, justice and willingness to correct the mistakes of the past. This explains the position of the Mechanism in relation to Semanza’s case. The rejection by the Mechanism is another important sign that the change in its leadership is going in the right direction. It comes on top of the arrest of Félicien Kabuga and the determination to pursue other fugitives still on the run. So we have reason to hope that we will soon have other welcome surprises."

Barbora Hola is co-director of the Centre for International Criminal Justice and co-president of the European Criminology Group on Atrocity Crimes and Transitional Justice. She thinks that while changes brought by Judge Agius are understandable, this decision leaves an impression of unfairness compared with previous decisions. “In contrast to the previous early releases it seems that the President actually started to interpret some of the factors, such as the level of rehabilitation, much more rigorously and stringently,” she says. “On the one hand, I think it is a welcome development that more thought and energy is put into this. On the other, it seems a bit unfair given that many before Semanza were released early without fulfilling these requirements”. 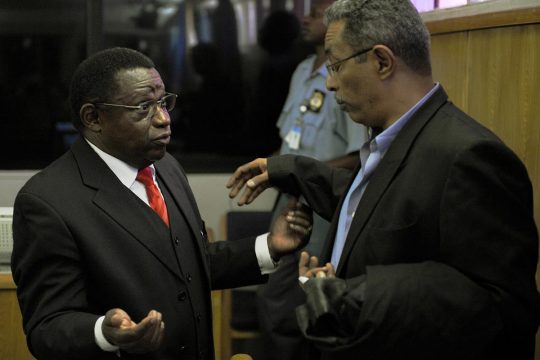 Early release of ICTR convicts: the practice beyond the outrage

Semanza’s lawyer Peter Robinson is perturbed. “I was very disappointed in this decision,” he says. “If anyone should be released after two-thirds of his sentence, it is Semanza.  He was a low ranking figure, had excellent behaviour for 24 years in prison, kept a low profile, and has no intention of returning to Rwanda. I was also frustrated that it took President Agius more than two years to decide on our motion for early release. The decision was issued 18 months after Semanza had served two-thirds of his sentence.”

But he does not think there’s discrimination against ICTR convicts compared with the ICTY: “Because Judge Agius has recently made similar decisions in cases from the former Yugoslavia, I don't believe that his decision is based on any discrimination against ICTR convicts.  Instead, I see his decision in the context of his fervent defence of ICTY and ICTR judgments, which leaves no room for someone to claim to have been wrongfully convicted, labels any disagreement with those judgments as genocide denial, and considers any support for the convicted persons as the glorification of war criminals. Had Semanza admitted his guilt, I think his motion would have been granted.  But he cannot do that because he knows that he was not at the places where he was convicted of leading attacks and was wrongfully convicted at the ICTR.”

Robinson says his next step will be to “try to bring new facts that will allow for a review of Semanza's judgment” and wait for a new MICT president who has a “more humanitarian view” of early release.

Judge Agius has early release requests on his desk from other ICTR convicts who have served two-thirds of their sentence, including Colonel Théoneste Bagosora and journalist Hassan Ngeze. The Rwandan government has already requested that these requests be rejected. After a legal battle that lasted several years, Bagosora was finally sentenced to 35 years in jail, escaping the life sentence imposed on him at first instance. Although the appeal judges upheld his conviction for genocide, crimes against humanity and war crimes, in the end they found him responsible only by omission, i.e. failing to prevent the crimes committed by the military and failing to punish the perpetrators. He is waiting for Judge Agius’s decision.

Ngeze, former owner and editor the Kangura newspaper, seeks to support his request with expressions of repentance addressed to the Mechanism and the world. In January he wrote that he had "disassociated himself" from any "ideology of an ethnic nature". In this letter, Ngeze, sentenced to 32 years in prison, declared "before the Mechanism and before Humanity" that former "Hutu dignitaries who were arrested and tried by the ICTR or who have not been troubled to date by justice" are animated by "the ethnic ideology that led to the destruction of the country and the genocide" of the Tutsis in 1994. "He regrets having taken too long to discover all this and not having been able to detach himself earlier from the hands of these politicians who manipulated everyone before, during and after the genocide perpetrated against Rwandans of Tutsi ethnicity.”

It will be up to Judge Agius to determine if this repentance is sincere.