The 56-year old Retired Major Lamin Bo Baaji was an intelligent officer in the Gambian military. He only had a high school certificate but he served at many places including the country’s biggest military barracks, Yundum, a 40-minute drive from Banjul, the capital city. At some point in 2007, Baaji got instructions from Lt. General Lang Tombong Tamba, Gambia’s army chief at the time, to escort one Sergeant Sam Kambie.

Kambie had travelled from Farafenni military camp, a bustling north bank rural town about two hours drive from Banjul. As his instructions were, Baaji – who claims no knowledge of why Kambie was to visit the National Intelligence Agency headquarters (NIA) – took Kambie to Pa Jallow, then director of the NIA. There, Kambie was booked and allegedly detained on orders of Alagie Morr, also known as Edrisa Jobe. Baaji left and returned the following day, arriving thirty minutes earlier than the time Kambie was to reappear before the panel of NIA agents who interviewed him.

“I found Kambie in the hall. I was very sad. He appeared to have been tortured. He was visibly in pain. He has lacerations and bruises,” Baaji told the Truth, Reconciliation and Reparations Commission (TRRC) on November 26. He claimed he protested to the leadership of the NIA that this should not have happened. But Jobe responded that Kambie was, Baaji said, among the “fucking people who sell arms and ammunitions to the rebels in Casamance”, a Senegalese region south of Gambia.

In August 2008, barely a year after he took Kambie to the NIA, Baaji was appointed by Gambia’s feared president, Yahya Jammeh, to preside over the Agency. Before 2007, Baaji said he was not aware that the NIA was a center of torture and illegal detention. He told the TRRC that when he became its director he summoned a meeting with all senior staff at the Agency to warn them that “illegal detention and tortures must stop”.

Unfortunately, the TRRC research led to more embarrassing findings. Resting by the TRRC lead counsel, Essa Faal, was a NIA register which catalogued names of all detainees at the institution from August 2008 to August 2009.

“While you were there, regardless of what you did, violations continued to happen. At least 50 people were illegally detained there. Do you agree?” asked Faal.

“Have you ever monitored [detentions] to ensure that all were lawful detentions?”

“Under my rule, all operations issues were handed to my deputy Momodou Hydara who has been at the institution for a long time. I handled administration.”

“In fact, you are a soldier. You know the doctrine of command responsibility, don’t you?”

“And you know, as a commander you are officially responsible for the unlawful conduct of your men in the execution of their duty?”

“And you know, as their superior, it is your responsibility to prevent violations where you know they are about to be committed?”

“You also know that your failure to punish or bring to book your subordinates who commit violations would lead to responsibility on your part for those violations?”

“As such, whether you delegate responsibility to Hydara or not, ultimately you are responsible for the violations of the rights of the 50 Gambians who were detained unlawfully.”

“Because Hydara was appointed like I was and it was for him to assist me. I could not be responsible for administration and operations at the same time.”

“So, your view is that because he was also appointed, you are not responsible as his superior for his misconduct in his line of duty?”

“I did not say that. What I said is that, if he [Hydara] is given an assignment, it is incumbent on him to do his job.”

“You knew that these violations were happening at the NIA when you started there.”

“Someone was tortured in front of me…”

“You knew the NIA was a place where people were being taken and tortured. This is a fact.”

“What have you done to make sure it is stopped?”

“I constantly reminded the staff of their responsibility.”

“Have you ever examined the detention register?”

“Now, I am telling you that upon examination of the detention register by us, we have discovered that at least 50 people have been unlawfully detained at the NIA during your tenure. How do you react to that?”

“It would surprise me.”

“You were head of NIA and [your staff] were illegally detaining people.”

“It is easy to sit here and say that you were not aware. But what happens at the NIA under your tenure is your responsibility.”

After an hour of exchange, Baaji would not take responsibility for the illegal detention of the 50 people. He claimed that if he had known those detainees were there for more than 72 hours, he would have taken them to court or released them.

The case of Lamin Karbou

At the beginning of his testimony, Baaji told the Commission that the torture of Kambie saddened him because he “never thought they would do that to a person in uniform”. But while he was in charge of the NIA, the Agency met a far worse treatment at antinarcotic agent Lamin Karbou, who was detained at his institution for 14 days and tortured several times.

Baaji admitted he called Karbou to the NIA on charges by his agents that he obstructed them in the course of their duty. But he insisted that it was only after he came from attending a security meeting at State House that he knew that Karbou had been tortured. Curiously, he does not even know who tortured him.

“I knew Lamin Karbou was tortured at the NIA,” Baaji told Essa Faal.

“Did you establish an inquiry into his torture?”

“Do you know it was your responsibility to do so?”

“I had a reason. After Lamin Karbou’s torture, I called a meeting to complain to my agents and I told them such activities will not be entertained. And I told them that this was my first and it must be the last. Before I started following the issue, I was removed…”

“You had an obligation to conduct an investigation and make sure that the person responsible no longer worked there. You did not do it. You agree?”

Lamin Karbou was arrested on June 3, 2008. Baaji was removed from his position as director of the NIA at the end of August. “You did nothing in three months”, stated Faal. Baaji insisted he wanted to probe the issue but he did not have enough time. He said he informed Jammeh about the incident by phone and that, obviously, Jammeh showed no interest.

Essa Faal then put to him additional evidence given by Karbou before the TRRC last February. Karbou told the Commission that while he was being detained at the NIA, one Alagie Sarjo who was brought in on drips and on a hospital bed claimed to have been shot by Jim Drammeh, an agent of the NIA.

“At the time he shot him, I was not aware,” responded Baaji when asked about the incident.

“It appears a trend is showing: You want to hear no evil, see no evil and do no evil…” retorted Faal.

“No, there were many things there that they would not allow me to know.” 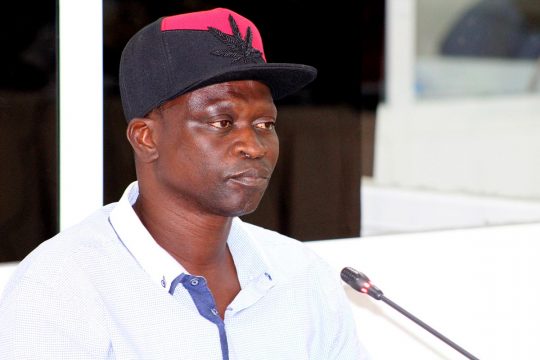 He may have been the only person to believe it but Baaji is of the view that he was removed from the NIA in August 2009 and taken back to the military because of his uncompromising stance not to be used as a tool for human rights violations.

Then came his own arrest.

Late 2009 army chief Lang Tombong Tamba was arrested for allegedly plotting a coup. Baaji said he was brought before a NIA panel and asked to testify against Tamba. He refused. Charged with concealing and planning a coup, he was tortured on three separate occasions. “All they wanted was to implicate Lang. I believe they would have killed him. I would not be an accomplice to that,” testified Baaji. “If I had done what they asked, I believe they would have rewarded me. But I have passed that stage to take favours from them to do bad things.”

Baaji would later be sentenced to death. He told the TRRC that on two separate occasions he and General Tamba narrowly escaped execution. In the first instance, Baaji was taken out of his cell at Mile 2 prison, his eyes tied, his hands cuffed. He was whisked away in a vehicle to a breezy place like a seaside. For unexplained reasons, he was spared. But he told the TRRC that a leader of that operation, whose name he wrote for the lead counsel’s eyes only, later told him that he should have been killed if it were not for the intervention of another close aide to Jammeh, whose name he also wrote for the Commission. On the second instance, he said they were listed among the 12-death row inmates Jammeh executed in 2009. According to Baaji, he escaped death after his lawyer Sheriff Marie Tambadou called the attorney general Lamin Jobarteh to inform him that they had not exhausted their legal remedies and that it would therefore be illegal to execute them.

Eventually Baaji’s sentence was commuted to life. In 2015 he was pardoned by Jammeh and went into exile in Senegal, only to come back after Jammeh was overthrown in January 2017.

In July 2005, 44 Ghanaian migrants as well as some 12 other migrants from Nigeria, Senegal, Togo, and Côte d’Ivoire were forcibly disappeared in The Gambia while on their way to Europe by sea. A Gambian national, Lamin Tunkara, purported to have been their smuggler also suffered the same fate.

On November 18, the families of some of these migrants filed a suit against the government of Gambia and of Ghana before the ECOWAS Community Court of Justice in Abuja, Nigeria. They were assisted in their suit by African Network Against Extrajudicial Killings and Enforced Disappearances (ANEKED).

In July 2019, five former members of the Junglers, a paramilitary hit-squad operating on the orders of the Gambia’s former ruler Yahya Jammeh, confessed before the Truth Commission to participating in the executions of the migrants. Last week, the lead counsel of Gambia’s Truth Commission, Essa Faal, told journalists that they will be holding a special hearing on the case of the migrants and that about five witnesses are expected to appear from Ghana. According to the Commission’s workplan, this hearing may start in December.

The plaintiffs are asking to know the fate and whereabouts of their killed relatives and to obtain reparations regardless of their migratory status, gender or nationality. “Nobody should have to wait fifteen years to get justice for such serious human rights violation. The silence and inaction from both governments only serves to fuel impunity and lack of transparency surrounding the enforced disappearance of the West Africans. The families left behind continue their search for truth and justice,” said Nana-Jo N’dow, founder and executive director of ANEKED.