Time for the truth in Gambia has taken its time. After two years and a half of hearings and investigations, after a recent series of delays and political hold-ups, the Truth, Reconciliation and Reparations Commission’s (TRRC) members were at the State House, in Banjul, on Thursday November 25 to deliver their final report to the President of the Republic, Adama Barrow.

It is now up to him – or to his successor – to make this report public and implement its recommendations, in a country wounded by systemic human rights violations during the military regime of his predecessor, Yahya Jammeh, from July 1994 to January 2017.

At least 240 people have been arbitrarily killed under Jammeh’s regime, said Commission’s chair Dr Lamin Sise at a press briefing with journalists on Thursday. But the Truth Commission refused to reveal a list of people it has recommended for prosecution, leaving it for the government to publish or proceed with the judiciary.

“Even if they didn’t reveal his name today, the Commission left no doubt that Jammeh was top among the former officials whose prosecutions it was recommending,” said Reed Brody of the International Commission of Jurists, who works with Gambian victims. “This report begins the countdown to the day Jammeh will have to face his victims. Whether it’s in The Gambia or before an international court, it will be very difficult now for him to escape justice.”

Barrow swings between victims and Jammeh

In the course of its mandate, the TRRC’s work has already lead to high-profile prosecutions.

One case was particularly exposed. In July 1995, Gambia recorded its most high-profile murder. A Finance minister, Ousman Koro Ceesay, was found beaten to death, in a partially burnt vehicle. The silence from the military who were implicated in the murder was deafening. The Truth Commission would torn the case widen open, preparing the ground for the eventual incarceration of Yankuba Touray, a former local government minister.

“(Alagie) Kanyi, when he was giving his testimony about how they killed Koro Ceesay, that was a moment I will never forget…,” President Barrow, who bids for his second term as his country head to polls on December 4, told a private television in July. “I am assuring [victims] that there will be justice in this country”, he also said.

But the same Barrow later attempted to form an alliance with Jammeh. In the same month he was promising justice to victims, members of the Alliance for Patriotic Reorientation and Construction Party (APRC) — Jammeh’s party — came in Banjul to hand a petition to Barrow. Its content was never made public. But two things were clear: they wanted the government to negate the Commission’s recommendations and free Yankuba Touray.

“When the TRRC’s final report is out, let it be put in a wastepaper basket,” said the APRC leader Fabakary Tombong Jatta on July 26 this year. Jatta became APRC’s leader after Jammeh departed for Equatorial Guinea, where he has been living in exile since 2017.

These political shifts have led to dissension and delays for the Truth Commission who, after three extensions of its mandate, delivered a 17-volumes report to President Barrow.

Barrow is required by the Commission’s act to submit copies of the report to country’s National Assembly and to the office of the United Nation’s Secretary General within 30 days. Within this period, the Justice minister can publish the report. Then the government has six months to issue a position paper on how it will implement TRRC’s recommendations.

“The report is coming at a very critical time when Gambians are heading to the polls in two weeks… It puts the issue of the TRRC on the table and on the agenda,” Sait Matty Jaw, a Gambian academic, told Justice Info.

Three parties are tipped the likeliest winner of December polls: United Democratic Party (UDP), Gambia Democratic Congress (GDC) and National Peoples’ Party (NPP). The APRC new leader is supporting Barrow’s NPP while Jammeh is with GDC. Only one of the three parties – UDP – made a commitment to “fully implement” the recommendations of the Truth Commission. Among the challengers, Essa Faal, the former lead council for the TRRC who is now running for presidency also made a public commitment to fully implement them.

I assure victims that my government will ensure that justice is done, but I urge them to be patient and allow the legal process to take its course.”

Barrow, though, appeared to have changed his tone since Jammeh finally refused alliances with the NPP. In the last two weeks, Jammeh has been using the platforms of GDC to lambast Barrow, something the administration reported to the Independent Electoral Commission as a threat to the stability of the country.

“I assure them (victims) that my government will ensure that justice is done, but I urge them to be patient and allow the legal process to take its course. That way, justice will prevail, and we will be able to heal as a country and move forward united and stronger, with greater determination,” said Barrow as he met the TRRC on Thursday.

Since his arrival to State House in 2018, Barrow has implemented recommendations of two commissions. He is both criticized for his failure to implement the conclusions of an inquiry into the shootings of protesters – when three young men were killed by paramilitary – and for having selectively implemented the recommendations of the Janneh Commission – an inquiry into the financial transactions of the former ruler.

With this in the background, couple with the complex political environment, academic Matty Jaw is sceptical on Barrow’s ability to implement the TRRC’s report if he is not subject to strong social pressure. “President Barrow has been seen to be foot-dragging (on receiving Commission’s report) but what Gambians need to do is to ensure that the recommendations of the Truth Commission is implemented,” he told Justice Info.

In their many progress reports, the commissioners put in recommendations on crimes and special courts that could be established to address them. But the TRRC has not granted amnesty to any individual and it seems that no one has applied.

“To forgive and forget with impunity the violations and abuses narrated by witnesses to the Commission would not only undermine reconciliation but also constitute a massive and egregious cover-up of the crimes committed,” said chair Dr Lamin Sise on Thursday.

“Not addressing these crimes could threaten, in the long term, the stability of our country and society. The individuals involved in perpetrating the violations and abuses must be held accountable for their crimes,” Sise added.

In its final report, the TRRC outlines 427 findings and 218 recommendations. The recommendations fall on prosecutions, further probe on certain cases, banning certain individuals involved in rights violations from holding public office, repeal certain laws, legal and institutional reforms and training and capacity building of security and other personnel.

“The crimes committed under the Jammeh regime have proven to constitute crimes against humanity, which means they fall under universal jurisdiction and can be prosecuted by any member of the international community – states and non-state actors like the International Criminal Court,” the executive secretary of the Truth Commission, Dr Baba Galleh Jallow, told Justice Info. “In the beginning we didn’t know the scope and extent of the violations. I am more optimistic today that however long it takes, however difficult it proves, justice will be done.”

In any event, the final say on the fate of the Gambia’s Truth Commission’s report may eventually rest on the shoulders of the winner of the December 4 presidential polls. 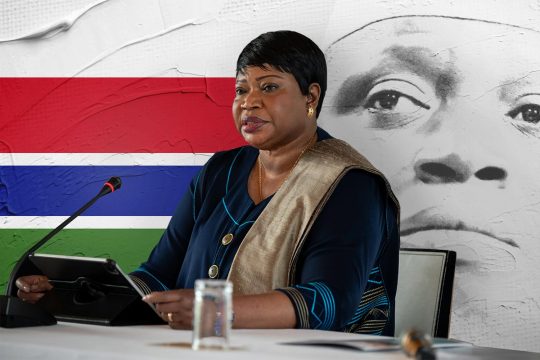 Fatou Bensouda: “I didn’t know what was happening under Jammeh”

In Gambia, reconciliation still on the back burner
Most read