At last week’s annual meeting of the International Criminal Court (ICC) – the Assembly of State Parties (ASP) – member states finally bit the bullet and agreed to appoint nine experts to deliver an independent strategic review of the court by September 2020. “It was a long time in coming,” said Fiona McKay, senior manager with the Open Society Justice Initiative (OSJI), an NGO, “and Afghanistan was the straw that broke the camel’s back”.

On April 12 this year, an ICC pre-trial chamber refused the prosecutor permission to open an investigation in Afghanistan – which could potentially look into alleged CIA torture “black sites” across the world – on the grounds that it was not “in the interests of justice”. The decision deeply shocked international justice advocates. Ironically the appeal against that decision was being heard last week across town at the same time as the ICC had its big annual reunion.

Last April, four former presidents of the ICC ASP had called for a an independent assessment of the court, following a decision which came hard on the heels of a determined attack on the ICC by the Trump administration. The four diplomats argued that the court could not afford decisions such as the Afghanistan one. “This is an unfortunate moment for the Court to appear less resilient than it should. While it has been the target of political attacks from its very inception, the current climate is particularly adverse. While almost two-thirds of the states making up the United Nations have joined the Rome Statute, some of the most powerful nations have not. Russia, China, and the United States have not only decided to stay away from the ICC, they are showing varying levels of contempt or hostility vis-à-vis the Court,” they wrote.

The trauma of the Afghanistan decision

Face to face, one of the signatories, Christian Wenaweser, ambassador of Lichtenstein to the UN and president of the ASP from 2008 to 2011, was even more blunt about some of the problems facing the court, including “the lack of a corporate culture, unpredictability on length of proceedings, sometimes there’s a decision and you read it and [you see] this took nine months and you ask why, because my interns could write it in five days”.

Maybe more expectedly, the African Union’s senior legal counsel, Ambassador Namira Negm, was also scathing in her assessment of the court’s current performance: “Has it succeeded in its job? No, it hasn’t. We have weak cases from the OTP [Office of the Prosecutor] and the outcome is people acquitted on a lack of evidence or the case not well done. And the judiciary, on clear legal issues they play with how it works. Why was the Afghanistan case sent away? No one knows. If that is not politics, I don’t know what is politics.”

Most observers welcomed a review, agreeing that – at a minimum – it’s a good moment to re-examine the institution. Kip Hale, an atrocity crimes attorney says, “there are systemic problems with both the judicial process and the office of the prosecutor that really require external review of a systematic nature. Having the ASP engaged is the critical last piece, showing the political support behind it”. Lorraine Smith van Lin, an adviser at Redress, an NGO, agreed. “The ICC as an institution is a ‘teenager’ and we know how fickle teenagers are. When everything is happening beautifully, everyone says why upset the apple cart. So, yes, do it now after the Afghanistan decision,” she said.

But some observers are worried that there are mixed motives behind the review. “I’m not sure it’s happened for the right reasons,” says Patryk Labuda, of the Fletcher School of Law and Diplomacy and the Geneva Academy. “The Afghanistan decision made everyone realize we have a serious problem. But I think some factors aren’t particularly compelling: that there have been acquittals should not be a problem in and of itself,” he said, referring to two other decisions that were hailed as major blows for the ICC Prosecutor – the acquittals of former vice president of the Democratic Republic of Congo Jean-Pierre Bemba and of former Ivorian president Laurent Gbagbo.

Another contributing factor in bringing dissatisfaction with the ICC’s lacklustre performance to the boil was the blowing open at last year’s ASP of the judges lobbying for more money from the court, despite their nearly 200,000 euros per year salaries. Since then, the ICC president Chile Eboe-Osuji has not missed any opportunity to mention the issue of judges’ pay at closed door sessions with – amongst others – cash-strapped NGOs. He did the same at last week’s ASP at the special session on the strategic review, stressing how badly paid he thought he and his fellows were, and that observers were wrong to think judges cared more about privileges than work. In fact, he stressed, judges had been forced into taking the case to a tribunal by the member states’ failure to deal with the issue. It was a perfect illustration of the strained relations between ‘management’ and ‘workers’ at the ICC coal face. 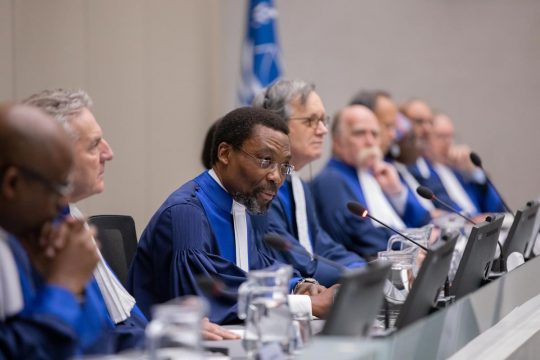 ICC judges at centre of controversy

Throwing the ball to the experts

And so experts have been called to the rescue. To provide a structure to what needs to be dealt with, the ASP Bureau has put together a matrix for them, providing a reference document on the three clusters: Governance, Judiciary, and Investigation & Prosecution. The nine experts – who include the least surprising names of former prosecutors Richard Goldstone and Hassan Jallow, former chief of prosecutions and Chief Justice of Tanzania Mohamed Chande Othman, and judge Iain Bonomy – are asked to provide “concrete practical and realistic solutions”. To fund their mission a 2017 budget surplus of around 300, 000 euros will be used and then topped up by states if needed.

In September, Court and states will get recommendations and each will decide at next year’s ASP how to apply them. “We insist strongly that this should be comprehensive because otherwise if it only cover certain aspects it’s going to be one-sided,” said Christian Wenaweser.

Against that backdrop, the forthcoming election of a new prosecutor, as Fatou Bensouda completes her nine-year tenure in June 2021, was not the main focus of this session’s agenda. 144 persons have applied to the job. But whoever is chosen will have to engage with the review’s outcomes. Behind the scenes, the word is that it is “Western Europe’s turn” after an African and a Latin American have had their go. Crown Prince in waiting seemed to be Belgian Serge Brammertz, the current prosecutor at the International Residual Mechanism for Criminal Tribunals (IRMCT), the successor body to the international tribunals for the former Yugoslavia and for Rwanda. He was regularly present at the ASP side events and would confirm his candidature with a confident smile, describing the prospective job as “challenging”.

Another key topic in everyone’s firing line – partly because six judges will be elected at the next ASP, providing fresh blood into the system – is the nomination and election of judges. A recent OSJI report concluded that “political factors too often favor political connections and expediency over transparency and merit. This practice damages the ICC bench, and as a consequence, the Court as a whole”. “Getting the right judges is fundamental and that’s where states have to step up and seek out the right candidates,” says McKay. She points out that “almost every state that spoke at the special ASP session said: we, states, also have a responsibility to look at ourselves and not just at the court’s performance.”

States nominate and elect the judges. Wenaweser agrees they have to share the blame.  States “are certainly not picking the right judges. We are not giving enough money either. I don’t think we give enough political support to the ICC. And cooperation issues,” he says. (Member states have again this year rejected the court’s financial requests and provided it with a budget increase of less than 1%. Money talks.) And some would like the review to emphasize on the states’ responsibilities a little more.

“I was hoping the methodology would make the ASP be under a bit of scrutiny on how they operate,“ said Kip Hale. Labuda points out that states may after all have tilted the balance of the review in their favour in their choice of experts. They are “very state centric,” he says. “There’s value in having state buy-in, but I thought some states might be more open to more critical external voices and it seems that the conservative states have won out.”

Hale agrees that “the signs are pointing in the wrong direction”. But he hopes “that these nine individuals will take the bull by the proverbial horns and build a process that is bottom up.” McKay already warns: “We shouldn’t think these experts are going to come up with the only solutions.”